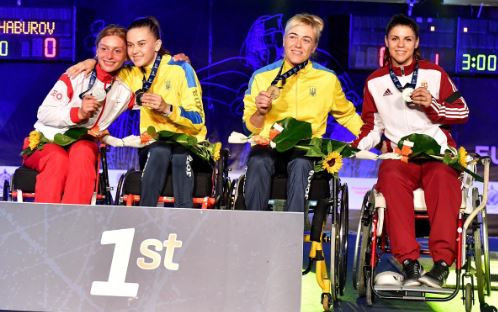 After beatiing Georgia’s Nino Tibiashvili 15-4 in the final, Morkvych said: “It was really important to me that I won a third title, but it was hard - everyone knows it is not easy to make the same result again.”

Morkvych’s toughest challenge appeared to have come in the semi-final, where she defeated team-mate Yevheniia Breus 15-11 at the PalaDeSantis.

Gilliver had beaten two of Shaburov’s compatriots to reach the final, winning his quarter-final against Roman Fedyaev, the men’s foil A gold medallist, 15-3 and then beating Mikhail Karpov 15-9 in the semi-final.

In the event it was the Briton who exited the tournament by the narrowest of margins as he was beaten 15-14.

But Cima was beaten 15-12 in the next round by Poland’s Adrian Castro, who went on to reach the final, where he faced fellow countryman Grzegorz Pluta.

The battle of the Poles was eventually won by Castro, who took gold by a margin of 15-11.

The women’s épée B final was won by Russia’s Irina Mishurova, silver medallist in the women’s foil B event, who earned a 15-6 triumph against Alesia Makrytskaya of Belarus.