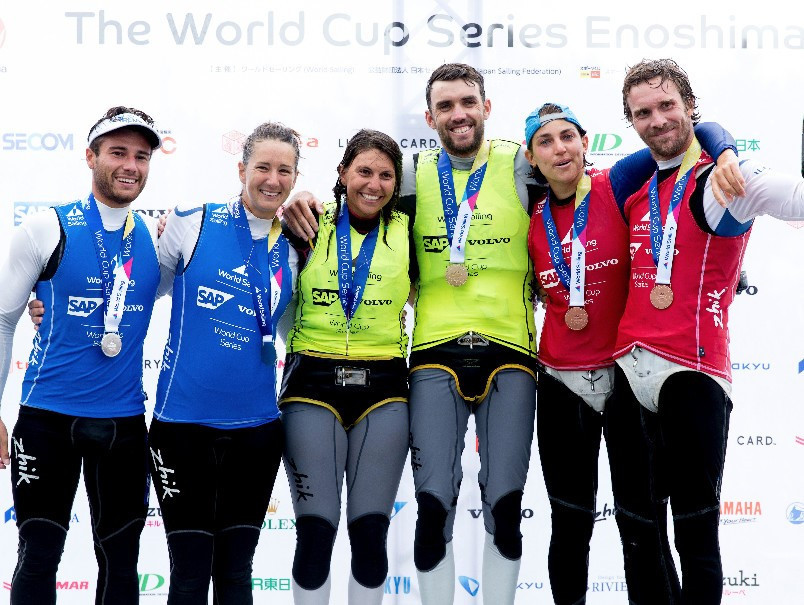 Jason Waterhouse and Lisa Darmanin of Australia secured the gold medal in the Nacra 17 class following a controversial day of racing at the Sailing World Cup and Tokyo 2020 test event in Enoshima.

The Australian duo overhauled Ruggero Tita and Caterina Banti, who took a five-point lead going into today's medal race, to end the Italian's recent dominance of the Nacra 17 fleet.

Their triumph came after compatriots Nathan and Haylee Outteridge submitted a pre-race protest against the Italian boats, which they said broke class regulations.

A jury said the boats did not breach the rules but Waterhouse continued the row, claiming "we feel they do things outside of what you should".

Tita and Banti were eventually forced to settle for the silver medal, with bronze going to their team-mates Vittorio Bissaro and Maelle Frascari.

Kiran Badloe of The Netherlands wrapped up the men's RS:X crown with a second-placed finish in the medal race.

Switzerland's Mateo Sanz Lanz claimed silver after he was fourth today, while bronze was clinched by Frenchman Pierre Le Coq.

"The level has been insane," said Badloe.

"Everyone has been on top of their game and sailed really well.

"I just had to be on it the whole time.

"I wasn’t sailing amazingly but I was just the most consistent out of everybody, and that put me on top."

But the Brits pulled off a magnificent victory to claim gold 🥇

The gold medal in the women's RS:X class was expected to be decided by a straight shoot-out between China's Peina Chen and Britain's Bryony Shaw.

But Chen proved too strong in the end as she was second, while Shaw slipped off the podium as she could only manage ninth.

Lilian de Geus of The Netherlands, the reigning world champion, sealed silver and China's Yunxiu Lu did enough for bronze.

James Peters and Fynn Sterritt fared better than Shaw as the British duo claimed the 49er title by winning the medal race.

The British team were locked on 52 points with Poland’s Lukasz Przybytek and Pawel Kolodzinsk, while New Zealand's Logan Dunning Beck and Oscar Gunn were only four points further adrift.

Peters and Sterritt held their nerve to secure gold in style, with the New Zealand pair finishing with silver and the Polish team claiming bronze.

Further British success will be confirmed on the final day of the event tomorrow as Elliot Hanson has an unassailable 43-point lead at the summit of the laser leaderboard.