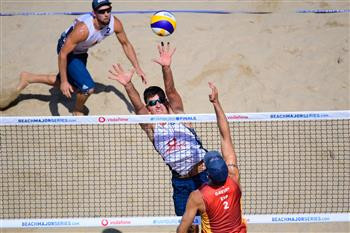 Sixth seeds Adrian Gavira and Pablo Herrera were the first to be ousted from podium placement contention in the opening men's pool round at the Beach Volleyball World Tour Finals in Hamburg.

The Spaniards, with 103 appearances together on the International Volleyball Federation (FIVB) World Tour, suffered a third Pool B defeat as they went down 13-21, 21-12, 15-12 in 41 minutes to ninth-seeded Michal Bryl and Grzegorz Fijalek of Poland.

Bryl and Fijalek, who are appearing in their 18th FIVB event together, have now won two of their three pool play matches to tie with seventh-seeded Martins Plavins and Edgars Tocs of Latvia for the second spot in the group behind second-seeded Anders Mol and Christian Sorum of Norway.

The Norwegians, whose winning run now extends well beyond 20, will seek to improve their 3-0 record with a final qualifying match against third-seeded Alexander Brouwer and Robert Meeuwsen of The Netherlands.

With 10 of the 20 group matches completed, the pairs of second-seeded Barbora Hermannova and Market Slukova of the Czech Republic, third-seeded Agatha Bednarczuk and Eduarda "Duda" Lisboa of Brazil and fifth-seeded Heather Bansley and Brandie Wilkerson of Canada are the pool leaders after winning matches today.

While the Brazilians and Canadians only played one match, Hermannova and Slukova won twice in Pool B, recording a 21-18, 19-21, 16-14 triumph in 50 minutes over seventh-seeded Mariafe Artacho and Taliqua Clancy of Australia, the Commonwealth Games silver medallists, and a 20-22, 21-13, 15-12 win over ninth-seeded Victoria Bieneck and Isabel Schneider of Germany.

Women's pool play continues through to Saturday (August 18) morning, and  their semi-finals and medal matches will be played on Sunday (August 19).

The men's "final four" matches will be played on Saturday.