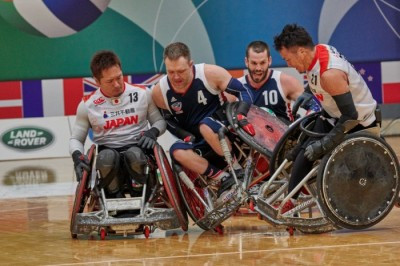 Japan are set to face hosts Australia in the final of the Wheelchair Rugby World Championship after upsetting the United States in their last-four encounter today.

The world’s number four-ranked team progressed to the gold medal match at a major tournament for the first time with a near faultless 51-46 victory against the Rio 2016 Paralympic silver medallists at the Genea Netball Centre in Sydney.

An over-and-back violation committed by US star Chuck Aoki in the final 30 seconds of the opening period gave Japan the upper hand and they carried it on with more turnovers in the second quarter to lead 28-23 at half-time.

The US continued to push, but were ultimately unable to get within four points as Japan completed a memorable performance.

As a result, Japan has set up a re-match with Australia after they beat a determined Great Britain outfit, 59-57, in the other semi-final at Quaycentre.

Masayuki Haga is eagerly anticipating another opportunity to face the in-form home nation, against whom Japan suffered a 65-52 defeat in Pool A yesterday.

"We lost to them yesterday, so we have to play better," Haga said.

"In the first-half [today], we executed what we had planned and we were really happy.

"Both sides created turnovers in the second-half, but we tried to focus on what we had to do and we managed to hold them until the end.

"Will we throw everything at Australia tomorrow."

And Australia goes through to play Japan in the gold medal match after beating Great Britain 59 -57! Watch it all again at https://t.co/Uix4mlJQic #2018wrwc pic.twitter.com/okosJf07Ww

Australian star high-pointer Chris Bond was relieved with his team's result against Britain, but admitted it was ideal to have such a tight game leading into another gold medal match.

"I dare say tomorrow is going to be much the same, but I’m proud of the guys that we got it home," he said.

"They [Great Britain] play a very balanced style of game and that seems to work well against our high-low [line-up], so we’ve got some work to do next time we play them.

"They [Japan] are going to come out with everything on the line and so will we - it’s going to be a cracking final."

Britain will look to exact revenge on a narrow 47-41 loss to the US in Pool B when they meet them for the bronze medal tomorrow.

Awaiting them in the fifth-place play-off are Canada, who claimed a 52-51 victory over Denmark earlier in the day.

Scandinavian rivals Sweden and Denmark are due to face off for the second time this week in the seventh-place play-off.

The ninth-place play-off is scheduled to be between Colombia and Poland after the former prevailed 61-59 in double over-time against New Zealand and the latter defeated Ireland 49-44.

New Zealand and Ireland will go up against each other in the 11th-place play-off.