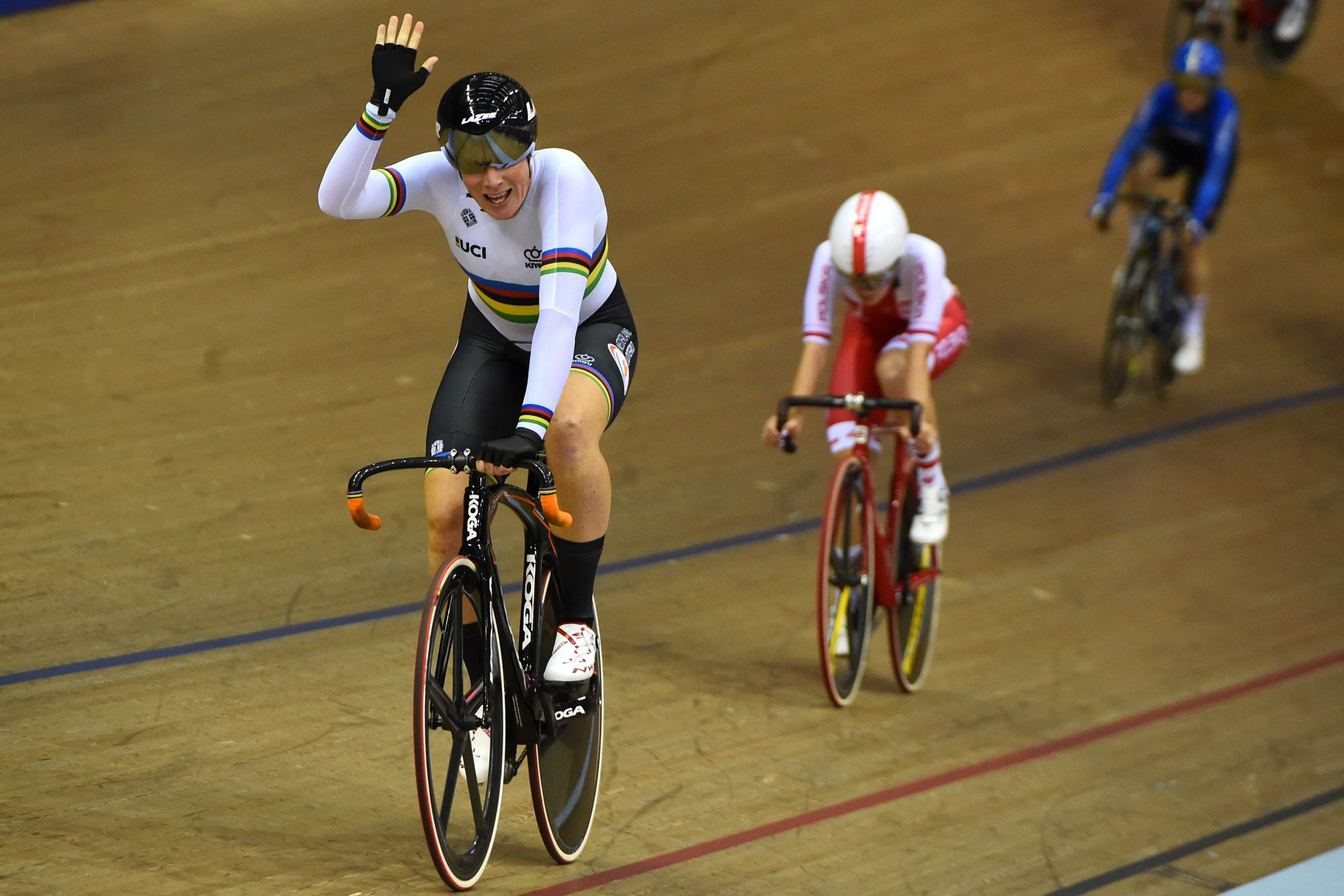 The Netherlands’ Kirsten Wild produced a tactical masterclass in the points race to overcome rival Katie Archibald in their head-to-head battle in the women’s omnium to claim her second gold of the European Championships here today.

Wild beat her opponent in the opening scratch race, the discipline she earned the European title in three days ago, before Archibald gained revenge by winning the elimination race.

The two riders had also been separated by only one place in the tempo race, which had been the second discipline.

Wild struck an early blow in the points race by winning two of the first three sprints to stretch her advantage over her rival.

Despite winning two sprints to close the gap, Archibald’s hopes were ended when Wild won the penultimate sprint to move into an unassailable lead.

It left Wild to celebrate her second gold by finishing the four event competition on 156 points, with Archibald taking silver with 144.

Paternoster rounded of the podium, as the Italian achieved a tally of 111.

Russia’s Daria Shmeleva completed a hat-trick of sprint titles, as she added to her team and individual sprint golds in the women’s 500 metres time trial.

Shmeleva, the World Championship silver medallist earlier this year, qualified fastest for the final of the event.

She backed up that performance by stopping the clock in 33.285 seconds to clinch the victory.

Ukraine's Olena Starikova claimed the silver medal in at time of 33.593, ending fractionally in front of third place Miriam Welte.

The German, who is the current world champion, took the bronze after ending just 0.007 seconds behind the silver medallist.

Jeffrey Hoogland doubled his gold medal tally in Glasgow, as he claimed the individual sprint crown, following to the team honours he had earned with his Dutch team-mates earlier this week.

Hoogland overcame one of his team sprint compatriots in the semi-finals, as he edged Harrie Lavreysen in three rides.

The Belgian pairing gained a lap early in the race with Germany’s Roger Kluge and Theo Reinhardt, the reigning world champions.

De Ketele and Ghys would continue to add to their tally, as they earned points in 13 of the 20 sprint laps to finish the event with a winning total of 60.

Their German rivals would settle for the silver medal on 49 points.

"We didn't have a real tactic, we didn't just want to stay behind too long," said De Ketele, a Six Day specialist.

“The beginning was perfect, I could launch Robbe to some good points for a sprint, then we turned the 'eco' mode on, to save power, then again another sprint and so on.

"Once your name is on the leaderboard and it's on top, you always work towards that but also the other riders start looking at you and it makes it actually easier for you because they try to follow you instead of attack you.

“You get in the heads of the other competitors, and we always had the advantage.

“Of course the legs were burning but that's when the mind and the will takes over."

They won the penultimate sprint before going clear of the chasing pack, which saw them take the 10 points available for the final sprint of the competition.

The 15 points they gained pushed them onto a total of 38 overall, five clear of fourth placed Spain.