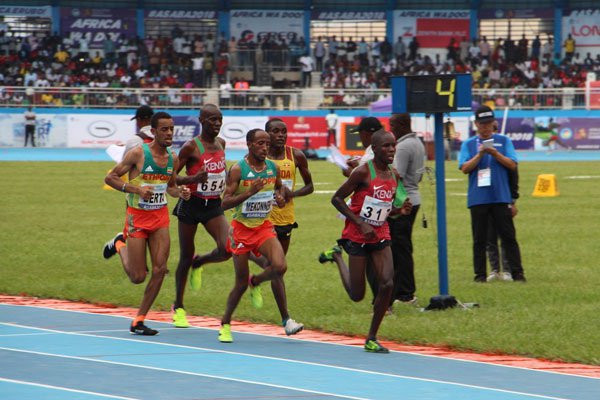 Chaotic preparations and numerous flight delays has overshadowed the sport so far at the African Senior Athletics Championships in Asaba.

Competition belatedly began this afternoon at the Stephen Keshi Stadium following the cancellation of the first scheduled session.

But it followed around 300 athletes from 20 countries having been stranded at Lagos Airport after a failure to organise domestic transfers.

Kenya were among countries repeatedly delayed and the dominant athletics power reportedly threatened to withdraw from the event yesterday after airport officials refused to give guarantees that a flight would get the athletes to the venue in time for the competition.

Athletes from various African countries who are billed to compete today at the Africa Senior Athletics Championship #Asaba2018 are still stranded in Lagos.

This is a national disgrace. When will our administrators learn to plan properly? pic.twitter.com/FZqJqw4q7t

Athletes competing today in the men's 10,000m were reportedly among those only to arrive earlier today.

Olympic silver medal winning javelin thrower Julius Yego was among those to make his criticism clear.

"This is the worst organised event in Africa and the world," he was quoted as saying by Kaya FM.

"We don’t even know if we will compete.

"For those who will be competing, there will be no Kenyans because we haven’t arrived at the place of the competition.

"Nigeria shouldn’t be given such competitions to arrange, they are poor in organising."

Nigeria is seeking to illustrate its event hosting credentials as Abuja bids to host the 2022 Summer Youth Olympic Games.

Marie Josée Ta Lou was the fastest qualifier in the women's 100m elsewhere on day one.

The Ivorian, who also suffered a delayed journey, crossed in 11.25sec.

Nigerian favourite Blessing Okagbare withdrew before the start of competition with what was described as a "small injury".

"I think this is the first and last time I will come to Nigeria to compete," Ta Lou posted on Instagram before her arrival.

"If you are not ready to organise something please don’t.

"Three days of travel for some Athletes raise alarm over poor organisation, facilities, as CAA (Confederation of African Athletics) tourney [sic] kicks off and two days for another, like you travel from Africa to Asia or America.

"I do four time African Championships and it’s my first time to have that kind of bad organisation."

"The organisers have apologised for the problems faced by some athletes," a spokesperson from the International Association of Athletics Federations (IAAF), whose President Sebastian Coe is also present, told insidethegames.

"All major events have logistic challenges, these were compounded here by the fact that the city hosting the games is a flight away from the capital and adverse weather over the weekend meant charter flights could not leave Lagos and created a backlog.

"The organisers put on extra planes.

"The final athletes arrived this morning amendments were made to the competition schedule which is fair.

"We are looking forward to a great championship and a great legacy with the revamped stadium."

We have been honoured by the Governor of the Delta State by granting the title of Chief to Lord Sebatian Coe ,the IAAF President and Hamad Kalkaba,the IAAF Vice-President and CAA President,on 31st july 2018 in Asaba. pic.twitter.com/GsTSo28JkL

Kalkaba claimed yesterday to be delighted with preparations after initial concerns over the city's readiness.

"When I came here I couldn’t believe Asaba could host this event," he was quoted as saying by Face2FaceAfrica.com.

"I am very happy and proud of what has been achieved."