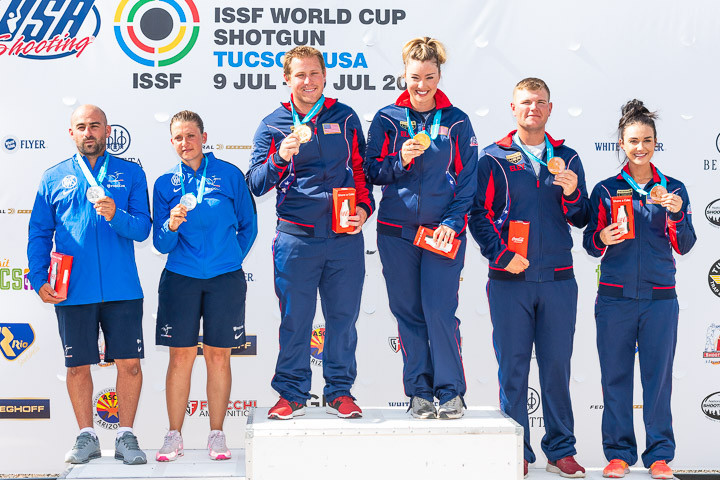 Hosts the United States enjoyed a successful end to the International Shooting Sport Federation World Cup campaign as they claimed gold and bronze in the mixed team event at the season finale in Tucson.

Corey Cogdell and Casey Wallace topped the podium with a score of 43 targets at the Tucson Trap and Skeet Club.

Their tally was one more than the French duo of Sebastien Guerrero and Melanie Couzy, who took silver with 42 hits.

Guerrero and Couzy denied the home team a one-two as Kayle Browning and William Hinton of the US finished in bronze medal position with 32.

"It was great to have our teammates in the final," said Wallace.

"The more flags we can put atop of the flag poles, the better for us.

"The World Championship is next for us, and we will try to build on the momentum we got here, and see what we can do in South Korea."

"We will be a team together once again there - added Cogdell - we won that opportunity in our last selection match, and we are really looking forward to it."

The mixed team competition, which will make its debut on the Olympic programme at Tokyo 2020 following controversial changes to the shooting events at the Games, brought the World Cup season to a close.

The next major event on the calendar is the World Championship, due to be held in Changwon in South Korea from September 2 to 14.