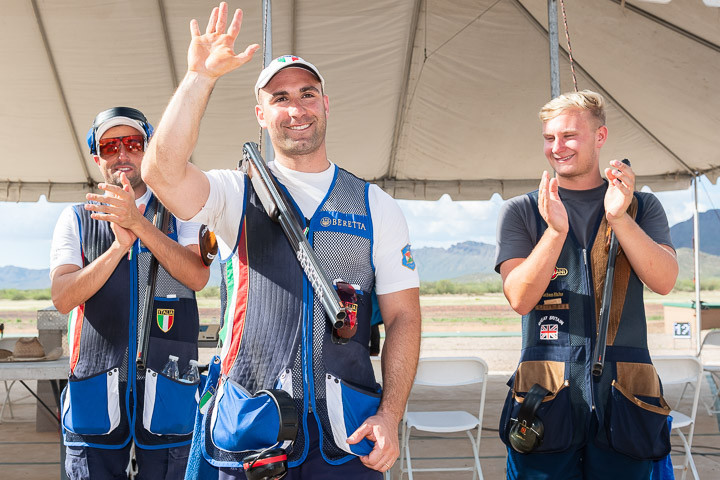 Simone Lorenzo Prosperi of Italy's decision to postpone his honeymoon to compete at the International Shooting Sport Federation World Cup in Tucson paid off as he claimed the gold medal in the men's trap event.

Prosperi, competing in his maiden final at this level, clinched his first World Cup victory with a score of 43 hits at the Tucson Trap and Skeet Club.

The 33-year-old beat compatriot Erminio Frasca, who registered a tally of 41 hits, while the bronze medal was secured by Britain’s first-time finalist Nathan Hales.

The two Italian shooters were neck and neck throughout the competition before Prosperi pulled clear to finish at the summit of the podium.

The triumph for Prosperi justified the postponement of his honeymoon following his marriage to rifle shooter Elsa Caputo.

"This is a great wedding present," he said.

"I got married two weeks ago and I postponed my honeymoon for this."

Prosperi added: "My wife Elsa is also a professional athlete.

"Today’s was my first final in a World Cup, and it couldn’t have finished in a better way."

Prosperi admitted he was nervous prior to the final but was able to hold his nerve to secure an impressive win.

"It was especially difficult when a clay machine broke down for a few minutes and we had to wait for it to be fixed," he added.

"But then I got into the flow, found my rhythm, and I managed to keep my emotions under control."

The event in Tucson is due to conclude tomorrow with the mixed team trap competition, set to make its debut on the Olympic programme at Tokyo 2020.