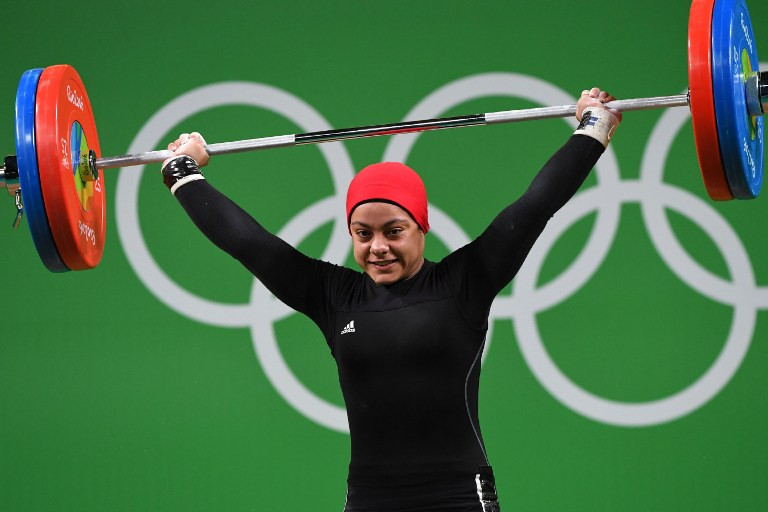 Egypt’s weightlifters, at least two of whom would be strong medal contenders, are in danger of missing the 2020 Olympic Games in Tokyo because of a slew of 2016 doping positives by teenagers.

That would be terrible news for the 77 kilograms world champion Mohamed Ehab, one of the world’s most popular weightlifters, and Sarah Ahmed, both of whom won Olympic bronze medals at Rio 2016.

Ahmed was the first female weightlifter from an Arab nation to stand on the Olympic podium, and her success led to a surge in popularity of the sport among Egyptian girls.

Ehab and Mahmoud Mahgoub, President of the Egyptian Weightlifting Federation (EWF), both said that the positives were the result of a conspiracy and that Egyptian weightlifting was "clean".

A new disciplinary body set up by the International Weightlifting Federation (IWF) will meet to decide Egypt’s fate soon.

Any nation with three or more positives in a calendar year is liable to a suspension - two years in this case - and a hefty fine.

When the IWF sent a team of testers to an Egypt training camp in Fayoum, before the African Youth and Junior Championships in nearby Cairo in December 2016, seven athletes tested positive.

Although two cases were announced by the IWF in January 2017, a man and a woman both aged 20, nothing has been disclosed about those aged under-18, who are considered minors and are exempt from public disclosures.

The EWF was informed of the teenagers’ positives by the IWF early in 2017.

Partly because of the age of the athletes the process of dealing with the cases was protracted, but is now complete.

"With the recent conclusion of the result management for all seven cases produced by Egypt in 2016, it is now possible to move forward with considering the possible consequences for the Egypt Member Federation," Attila Adamfi, director general of the IWF, said.

That independent panel, whose creation was a feature of the IWF’s new anti-doping policy adopted in April this year, has not sat before and its members - a minimum of five from outside the IWF - have yet to be announced.

Should the panel choose to impose the maximum penalty for seven doping violations within a calendar year, it would be a two-year suspension, which would exclude Egypt from Tokyo 2020, and a fine of $250,000.

As the doping cases happened before April of this year the 2015 anti-doping policy applies; if the new, tougher policy had been in effect at the time the potential suspension would be four years.

Mahgoub, head of the EWF and a member of the IWF Executive Board, said he believed Egypt had been the victim of "a conspiracy".

When news of the tests emerged a year ago Mahgoub said there were "people inside and outside the Federation who are fighting us".

An official from Egypt’s national anti-doping agency also suggested there must have been foul play.

Now Mahgoub maintains his "conspiracy" view, and he told insidethegames an internal inquiry had been held into athletes, coaches and clubs, the findings of which had been sent to the IWF.

"After a long investigation we found that, yes, Egypt was the victim of conspiracy," he said.

"I am satisfied that weightlifting in Egypt is now clean."

Mahgoub said there had been no positives in the past two years, when Egyptian lifters had been tested 150 times by their national agency.

Ehab, who is competing in the Mediterranean Games in Tarragona in Spain next week, said, "I think that what happened was a trap and this was not the policy of Egypt in dealing with young weightlifters.

"The next play with the new qualifying system for the Tokyo 2020 Olympic Games will show that Egypt is clean and free of doping."

Asked if he expected Egypt to compete at Tokyo 2020, Mahgoub said, "We will do our best and we are planning to make the same achievements in Tokyo [as in Rio]."

The Federation had made headlines in Egypt last month when the team was held at Cairo airport for 12 hours on its return from a training camp in Azerbaijan, one of the nations currently suspended from weightlifting for multiple doping offences.

The Egyptians had a large haul of supplements which they had bought in Azerbaijan, and which were impounded by customs officials.

"All the samples were negative," he said.

Regarding the Azerbaijan supplements, Adamfi said the IWF was investigating the case with the involvement of the World Anti-Doping Agency.

"At this stage we are not able to provide any further comment," he said.