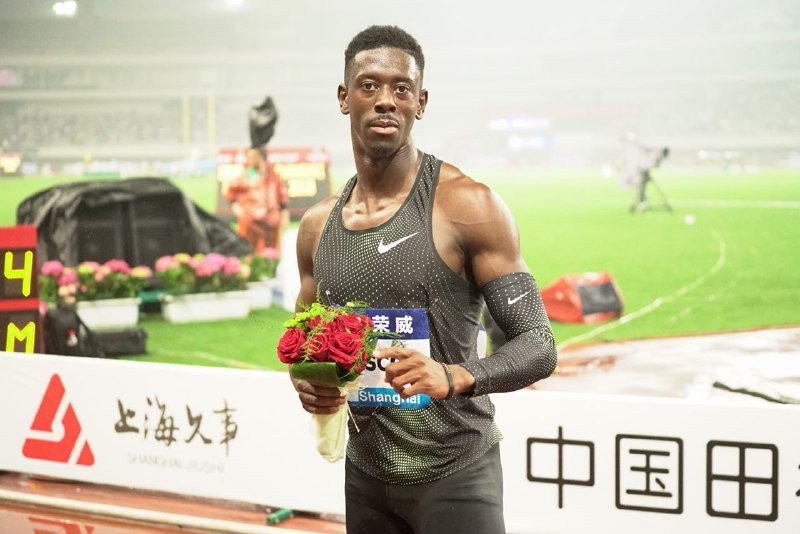 British sprinter Reece Prescod produced the biggest surprise of the second International Association of Athletics Federations Diamond League meeting of the season as he won the concluding men’s 100 metres in a rainy Shanghai Stadium.

Prescod finished just 0.01 clear to frustrate what would have been a winning finale for the home country as world indoor silver medallist Su Bingtian had to settle for second ahead of compatriot Xie Zhenye, who clocked 10.17, 0.01 ahead of Ujah.

The 36-year-old Gatlin was seventh in 10.20, one place behind Turkey’s world 200m champion Ramil Guliyev, who clocked the same time, and one place ahead of De Grasse, still seeking form after the hamstring strain that kept him out of last year’s World Championships, who could only manage 10.25.

“When I saw the rain tonight I thought ‘Yes!’,” said Prescod.

“I train in these conditions all the time in the East Midlands.

“I knew I had it in me to win as long as I executed my race - it’s definitely the happiest moment in my time on the Diamond League circuit.”

Shaunae Miller-Uibo, The Bahamas’ Olympic 400m champion, got her defence of the 200m title off to an eye-catching start as she defeated the world champion, Dafne Schippers, in a meeting record of 22.06.

The Dutch sprinter clocked 22.34 for second place ahead of Jamaica’s Shericka Jackson, who recorded 22.36, with world silver medallist Marie-Joe Ta Lou of the Ivory Coast fourth in 22.38.

“It was the first 200m of the season, which is always a tough one for me,” said Schippers.

Miller-Uibo’s 22-year-old compatriot Steven Gardiner, winner of the opening Doha Diamond League 400m in a national record of 43.87, maintained his dominance with another victory in 43.99, with Botswana’s Commonwealth champion Isaac Makwala second in 44.23.

The crowd witnessed an expected home win in the women’s shot put, where China’s world champion Gong Lijiao finished more than a metre clear of her nearest opposition with 19.99m, the farthest thrown so far this year.

All four of Lijiao’s throws, each one of which surpassed 19m, would have been enough to win, as the best effort of Jamaica’s second placed Danniel Thomas-Dodd was 18.70.

Gong, however, expressed a shade of disappointment.

“Today’s competition was good, but I intended to break 20m and it’s a pity I didn’t manage it," she said.

There were further home celebrations after the women’s javelin, won by China’s Huihui Lyu with a meeting record of 66.85m.

Jamaica’s world and Olympic 110m hurdles champion Omar McLeod completed a hat-trick of titles in Shanghai with a time of 13.16 - equalling the best run so far this season.

Spain’s Olympic silver medallist Orlando Ortega was second in 13.17, ahead of Russia's Sergey Shubenkov, starting the defence of his Diamond League title as an Authorised Neutral Athlete, who clocked 13.27.

Shubenkov’s compatriot Mariya Lasitskene, the double world women’s high jump champion, maintained a winning run that goes back to July 2016 as she cleared 1.97m, the best so far this season.

Colombia’s Olympic triple jump champion Caterine Ibarguen, who was unbeaten for almost four years until losing at the 2016 Birmingham Diamond League meeting, maintained business as usual with victory in 14.80m, the farthest achieved so far this season.

World and Commonwealth long jump champion Luvo Manyonga of South Africa showed his class once again as he produced a final effort of 8.56m to earn a clear-cut win, having been ahead by virtue of a better record having matched the 8.43 achieved by home jumper Yuhao Shi in the second round.

World pole vault champion Sam Kendricks of the United States, another athlete seeking a Shanghai hat-trick, had an off day as he finished ninth with 5.46 in a competition won on countback by France’s world record holder Renaud Lavillenie after he had finished level with Poland’s Piotr Lisek on 5.81.

The men’s 800m produced a breakthrough victory for another young Kenyan, Wycliffe Kinyamal, in a meeting record of 1:43.91.

Olympic 400m hurdles champion Dalilah Muhammad of the United States won in a season’s best of 53.77, with Janieve Russell of Jamaica clocking a personal best of 53.78 in second place.

Beatrice Chepkoech of Kenya won the women’s 3000m steeplechase in 9:07.27, the fastest time this year.