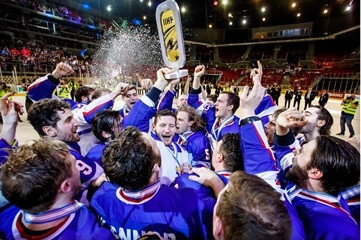 Great Britain have returned to ice hockey's elite level after securing an overtime victory away against Hungary on the final day of the 2018 International Ice Hockey Federation (IIHF) Ice Hockey World Championship Division IA competition at the Laszlo Papp Sportarena in Budapest.

It had looked like Hungary were set to secure promotion on home ice as they led 2-0 in the third and final period.

The momentum was clearly in Britain's hands from that moment on and it was Ben O'Connor's goal in the shootout that ensured they topped the group and sealed their second promotion in two years.

O'Connor said the team's togetherness was the reason behind their promotion.

"We just had an unbelievable tournament," he said.

"We had a great first period, absorbed the pressure and took it back to them."

O'Connor added: "Anything can happen when you dream and that’s what was shown in this tournament."

"We’re like a family, we pulled together, we’re all best friends.

"We worked together as a team and believed it is possible."

The promotion means Great Britain, the Olympic champions in 1936, will now play at ice hockey's elite level for the first time since 1994 and compete at next year's IIHF World Championships in Slovakia.

Despite their loss to Italy, Slovenia remain in Division IA with Poland finishing bottom of the table.

Poland will now be relegated to Division IB and replaced in Division IA by Lithuania, who secured promotion with a 4-1 win against Baltic rivals on home ice at the Žalgiris Arena in Kaunas.

The results of the 2018 IIHF World Championship, due to take place in Denmark from May 4 to 20, will decide who replaces Great Britain and Slovenia in Division IA next year.