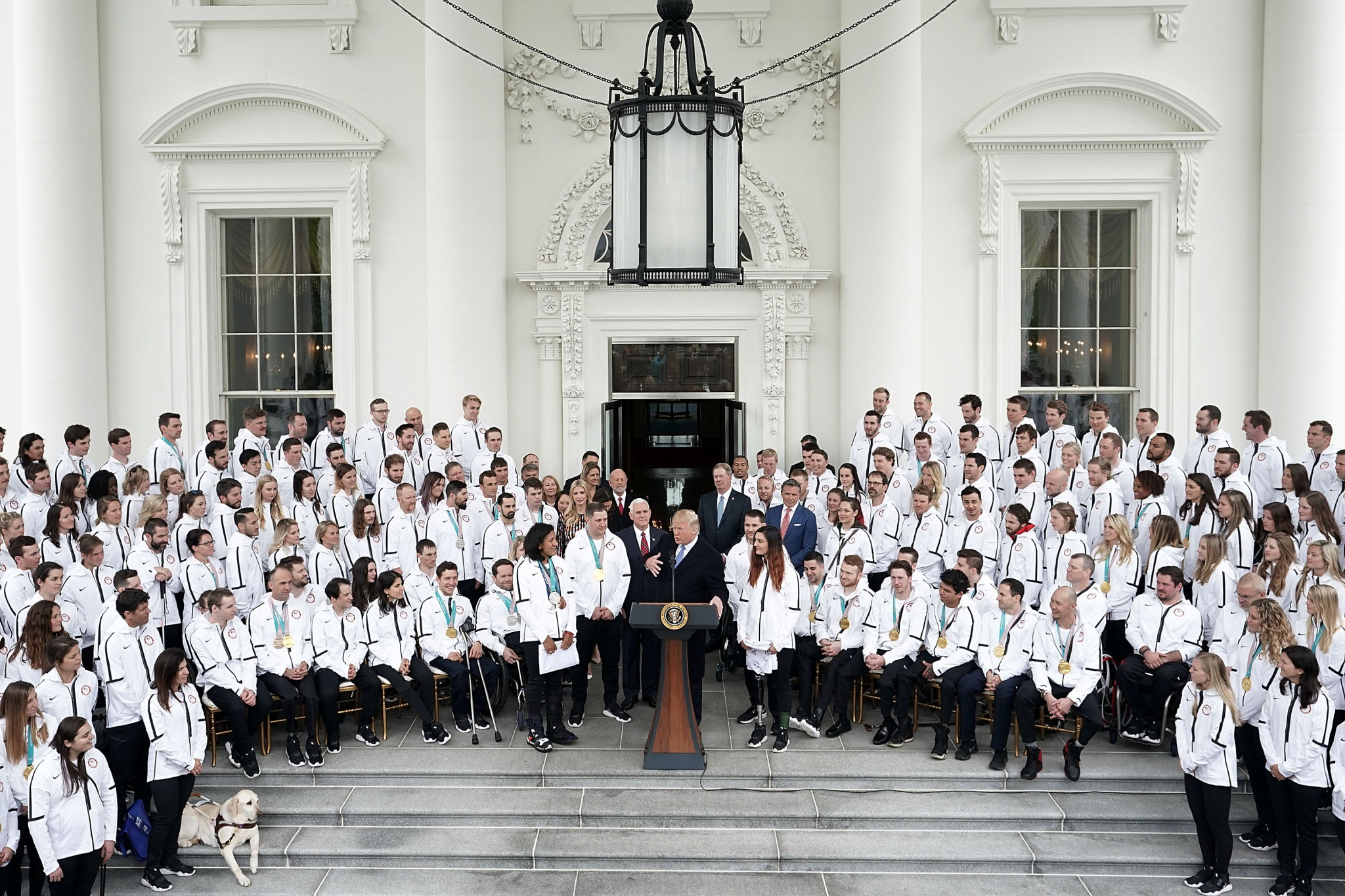 United States President Donald Trump welcomed around 200 Winter Olympians and Paralympians from the country to the White House to praise them for the "awfully good job" they did at Pyeongchang 2018.

In a continuation of a longstanding tradition to commemorate returning athletes, Trump singled-out a group of individual stars who were invited to the podium to speak.

"You made us very proud," Trump said.

"You overcame setbacks, you powered through obstacles.

"And I will tell you this, because of your hard work and your sacrifice, you were given the greatest honour in sports: to represent the United States as an Olympic athlete."

Trump was presented with two flags signed by members of Olympic and Paralympic delegations by Elana Meyers Taylor, winner of a silver medal in the two-woman bobsled, John Shuster, a member of the gold-medal winning men's curling team; and Paralympic snowboarders Brenna Huckaby and Mike Schultz.

"So today, on behalf of the United States, I want to thank every Olympian and Paralympian... To every member of @TeamUSA, I congratulate you on your achievements that were really a lifetime in the making." pic.twitter.com/6QFdkfyRyh

Some leading athletes chose not to attend the ceremony due to a combination of prior commitments and political protests.

Freestyle skier Gus Kenworthy, Alpine skiier Lindsey Vonn and figure skater Nathan Chen and Adam Rippon were among those to claim they were not attending for political reasons.

"I hope to represent the people of the United States, not the President," Vonn, winner of a solitary bronze medal in the downhill event at Pyeongchang 2018, told CNN in December.

"I take the Olympics very seriously and what they mean and what they represent, what walking under our flag means in the Opening Ceremonies.

"And, you know, I want to represent our country well, and I don't think there are a lot of people currently in our Government that do that."

Rippon, winner of a team figure skating Olympic bronze medal, tweeted: "Olympians from the 2018 Games have been invited to go to the White House today, I will not be going.

"I will not stand with people who discriminate against those that they perceive as different.

"In lieu of going to D.C., I have donated to a few of my favorite causes."

Gold medal winning snowboarder Shaun White and Chloe Kim were each absent as they had weddings to attend, while various figure skaters were absent due to commitment with the Dancing from the Stars television programme.

United States Olympic Committee spokesperson Mark Jones claimed, though, that attendance numbers this year were similar to those after Sochi 2014.

"It's always an honour for Team USA to be invited to the White House, and all the athletes that attended had a great time," he said.

Trump did not attend either the Olympics or Paralympics, with his Vice-President Mike Pence and daughter Ivanka each leading US delegations at different points.

He has, however, attempted to claim credit for the participation of North Korea at Pyeongchang 2018 following months of hostile rhetoric beforehand.

"You had very good crowds, and I have to say, without certain backing, those crowds were not looking good," Trump said during the ceremony, according to the Chicago Tribune.

"But all of a sudden, those crowds got very, very big, very powerful, and it became a very, very successful Olympics aside from everything else.

"They had a lot more people show up than they thought, and you think you know why, right?"

The US finished fourth in the Olympics medal table with nine gold, eight silver and six bronze medals.

They then finished top of the Paralympics medal haul with 13 gold, 15 silver and eight bronze medals.

Trump has been criticised by some today for his comments during the ceremony that the Paralympics were "a little tough to watch too much", but it is likely he was referring to the lack of time he had more than his opinion of them.

"What happened with the Paralympics was so incredible and so inspiring to me," was his full quote.

"And I watched - it's a little tough to watch too much, but I watched as much as I could.

"It was really fantastic, and I want to thank you."