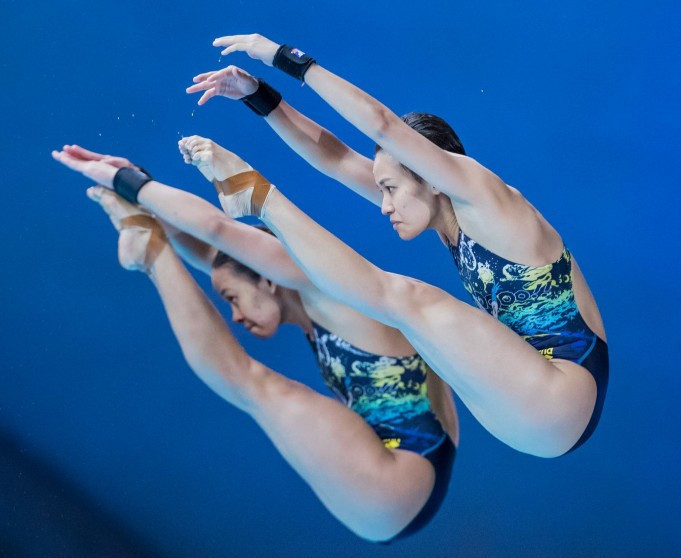 China took three victories on the first day of the International Swimming Federation (FINA) Diving World Series at the Montreal Olympic pool – but Malaysia broke their season-long winning sequence by taking the first gold medal on offer in the 1976 Olympic venue.

The Chinese divers had come to Canada having won every single event of the two previous legs of the 2018 FINA Diving World Series – a total of 20 golds.

But the day began with an upset as the 21st gold medal went to Malaysia’s Pandelela Pamg and Jun Hoong Cheong in the women's 10 metre synchro.

The competition was so close that the top three finishers were separated by less than two points.

"We tried our best, but second place is a little disappointing." Said Kim Mi Rae.

China’s Si and Lin only teamed up one week ago as Ren Qian, Si’s gold-medal synchro partner from the 2017 World Championships, is taking a break.

Despite their lack of training time, both Si and Lin admitted they were expecting to win.

Whether they will stay together remains to be seen.

China’s Qui Bo and Yang Jian dominated the men’s 10m synchro event after the first two rounds where each dive was limited to a 2.0 degree of difficulty. In their last four dives.

Qui and Yang precisely executed the hardest dives per round and won by a massive 46.83 points over runners-up Aleksandr Bondar and Viktor Minibaev of Russia, and 51.45 points ahead US pairing Brandon Loschiavo and Steele Johnson - the latter of whom was diving with a stress fracture in his right foot.

Minibaev said the turning point came in their botched fifth dive, a 207B - back 3½ somersaults - which earned only 59.40 points and briefly dropped them to third.

"We haven’t been good with it since the New Year," Minibaev said

Referring to the FINA Diving World Series final, due to take place in Russia from May 4 to 6, he added: "We still have time to work on it before Kazan so we can win with it.”

China won its second gold of the day in the women’s 3m synchro, although the host nation made them work for it, with Jennifer Abel and Melissa Citrini Beaulieu leading Shi Tingmao and Yani Chang after the three of the five dives.

A mistake by the Canadians on the fourth dive tipped the balance, and China ended up 8.67 points ahead of them, and 17.70 points ahead of Australia’s Esther Qin and Anabelle Smith who were diving together for just the second time.

Sam Dorman and Mike Hixon of the United States came from behind in their final dive to place third.