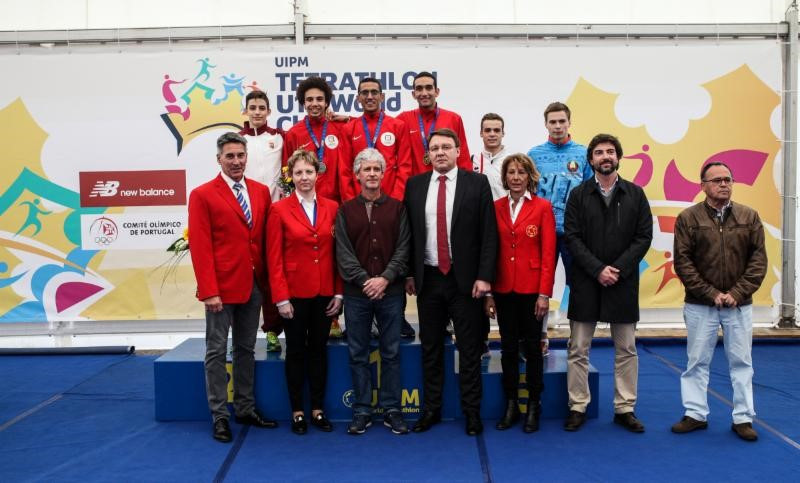 Egyptian athletes took all three medals on offer in the men's event at the International Modern Pentathlon Union (UIPM) 2018 Tetrathlon under-19 World Championships in Caldas da Rainha in Portugal.

Ahmed Elgendy claimed gold after a consistent display throughout the day which saw him perform well in the fencing, swimming and laser run events.

The Egyptian achieved a score of 24 victories and 12 defeats in the fencing before recording a time of 1min 59.24sec in the pool.France's Ugo Fleurot

These excellent performances put him eight seconds ahead of the pack in the laser run at the end of the day, which he won convincingly.

Elgendy, who has now qualified for the 2018 Summer Youth Olympic Games in Buenos Aries, scored 1,182 points overall with compatriots Mohanad Shaban and Alyedin Sweilam making it an Egyptian clean sweep of the podium thanks to points totals of 1,155 and 1,150 respectively.

"It was hard, but I’m so happy and I can’t believe I’ve done it," Elgendy said.

"Last year I got silver at the under-19 World Championships and now I have gold, so it’s a huge day for me.

"I think my fencing has been improving very well and it gave me self-confidence."

"I’m so excited to be going to the Youth Olympic Games," Elgendy added.

"My team deserved this success because they trained very well and very hard."

Egyptian coach Samy Awad was overwhelmed by his country's achievement of taking all three spots on the podium.

"Today is really the greatest day of my life," he said.

"I’ve been in pentathlon for 37 years and I’ve joined my team at so many different competitions, and today was the biggest moment we ever had.

"For the first time, the Egypt team has finished one, two and three in a competition and it was an amazing performance - really it was our day today."

Along with the three Egyptians, France's Ugo Fleurot, József Tamás of Hungary and Belarus' Uladzislau Astrouski also secured their spots at Buenos Aries 2018 after finishing fourth, fifth and sixth respectively.

The event is due to continue tomorrow with 21 nations expected to compete in the women's relay.