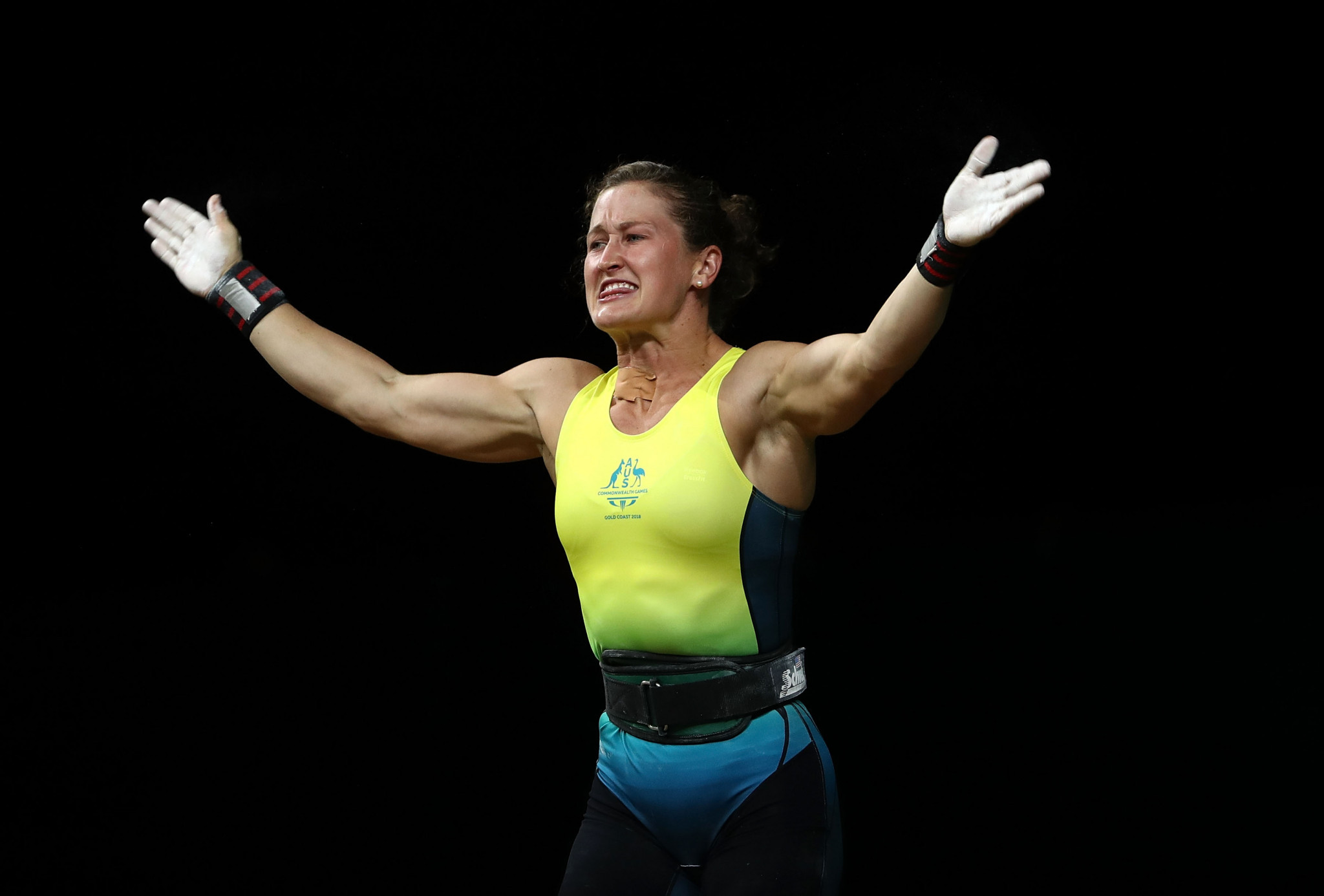 The 2017 CrossFit Games champion sent the Australian crowd into raptures having recorded a winning total of 201kg with six good lifts out of six.

She managed personal-best lifts in both the snatch and clean and jerk, registering 87kg and 114kg respectively.

Pre-event favourite Tali Darsigny of Canada held a one kilogram advantage over Toomey after the snatch but ended up one kilogram behind overall.

She managed 88kg in the snatch and 112kg in the clean and jerk.

She had promised to excel at Gold Coast 2018 in memory of her late relative.

"I am still trying to find the words to express how amazing it really feels," Toomey, who prevailed with the last lift of the competition, said.

"One of my goals was to get six out of six lifts, and I was successful at that."

Wini finished with a total of 189kg after managing 84kg in the snatch and 105kg in the clean and jerk.

In the women's 53kg event, Sanjita Chanu Khumukcham came out on top to claim India's second weightlifting gold medal of the Games.

The 24-year-old recorded a total of 192kg to beat nearest challenger Loa Dika Toua of Papua New Guinea by a margin of 10kg.

Dika Toua, the defending champion, had the opportunity to secure victory with her final clean and jerk attempt at 113kg but was unable to manage it.

Canada’s Rachel Leblanc-Bazinet finished third with a total of 181kg.

She suffered some nervous moments after failing with her last clean and jerk attempt at 112kg but her previous good lift at 108kg ultimately proved to be enough to seal victory after Toua fell short at 113kg.

Success for Khumukcham comes on the back of compatriot Chanu Saikhom Mirabai’s triumph in the women’s 48kg, the event which she won herself at Glasgow 2014.

"It was tougher this time," Khumukcham said.

Toua was left to rue her final clean and jerk attempt, but admitted it was a tall order.

"My preparations have been going well, but I have not lifted that weight since I did it in training in 2005."

There was a dramatic end to the men's 69kg event as Wales' Gareth Evans held on to top spot after Samoa's Vaipava Ioane failed with two clean and jerk attempts to claim victory.

Evans posted a total of 299kg before facing an anxious wait to see if it would be enough to keep him in first place.

His victory and Wales' first gold medal of the Games was confirmed when Ioane failed for a second time at 175kg, a lift which would have moved the Samoan onto a total of 300kg and equalled the Commonwealth Games record for the clean and jerk.

To add insult to injury, Ioane ultimately ended up outside of the medal positions having sacrificed the opportunity to go for either the silver or bronze medal in his quest for gold.

The 28-year-old failed twice at 163kg in the clean and jerk and knew that if he had managed the weight, he would have increased his total from 297kg to 300kg.

India’s Deepak Lather secured the bronze medal with a total of 295kg.

Dissanayake Mudiyanselage had led after the snatch with 137kg.

Evans and Lather were tied for second spot on 136kg.

Weightlifting action at Gold Coast 2018 is due to continue tomorrow with the men's 77kg, women's 63kg and men's 85kg events taking centre stage.