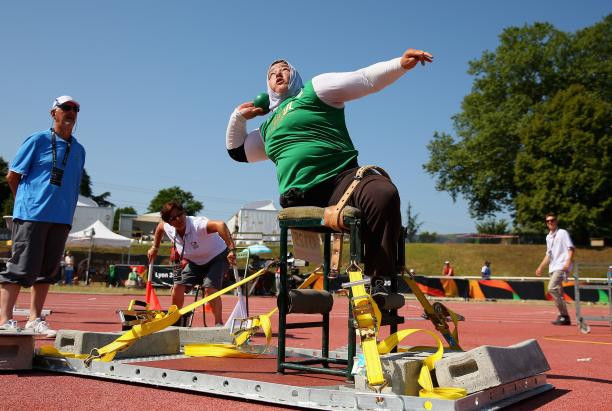 Algeria’s Nadia Medjmedj broke her own discus F56 world record on the third day of the World Para Athletics Grand Prix in Dubai.

It is the second consecutive year the 43-year-old, who won two bronze medals at the Rio 2016 Paralympics, has rewritten the record books at the season-opening Grand Prix in the United Arab Emirates.

Last year she threw 26.17 metres to break a world record that had stood for 14 years.

This time Medjmedj added another 11 centimetres with a massive 26.28m throw in the fourth round of competition.

Regional records fell too at the Dubai Club for the Disabled track.

Malik, who became her country's first female Paralympic medallist when she won shot put F53 silver at the Rio Paralympics, managed a best of 9.35m in Dubai.

Manolis Stefanoudakis remains the man to beat in the men's javelin F54 as the Paralympic and world champion sealed victory with his penultimate throw of 28.15m.

There was a new Asian long jump T13 record for Kazakhstan's Islam Salimov who leapt a best of 6.93m - 18cm further than his previous mark set two years ago in Beijing.

Paralympic and world champion Raoua Tlili completed her hat-trick of wins in the Middle East with victory as she reached 9.28m in the shot put F35-37/40/41.

The 28-year-old, who competes in the F41 class, had already won the javelin and discus events on the first two days of competition.

Just 25cm separated the top three in the men's javelin F55, but it was Egypt's Yaser Abdelaziz Elsayed who earned gold with 28.58m, with India's Neeraj Yadav - winner of the shot put and discus earlier in the week - in second place on 28.36m and his team-mate Amit Balyan third on 28.33m.

The 27-year-old won Oman's only medal at last year's World Championships when he threw an Asian record of 10.49m to claim silver in the shot put F32.

On the track, Paralympic and world champion Ahmad Almutairi continued his unbeaten run in the men's T33 sprints with a win in the 100m T33/51/52 in 17.26sec.

India's T44 Para-athlete Manoj Baskar also earned his second win in Dubai, having won the long jump earlier and this time it was the 100m in 11.98.

There was a win for the host nation as Mohammad Vahdani took gold in the 100m T54 in 14.64, while Saudi Arabia's world finalist Fahad Alganaidl won the T53 race in 15.13.

Reigning world champion Marcel Hug was back to his winning ways as he finished fastest in the timed heats of the men's T1,500m T34 /54, recording 3:12.40.

The Swiss racer, who claimed three distance gold medals at London 2017, took the top spot ahead of Kuwaiti Faisal Alrajehi, who recorded 3:12.68, with Tunisia’s Yassine Gharbi third in 3:13.00.