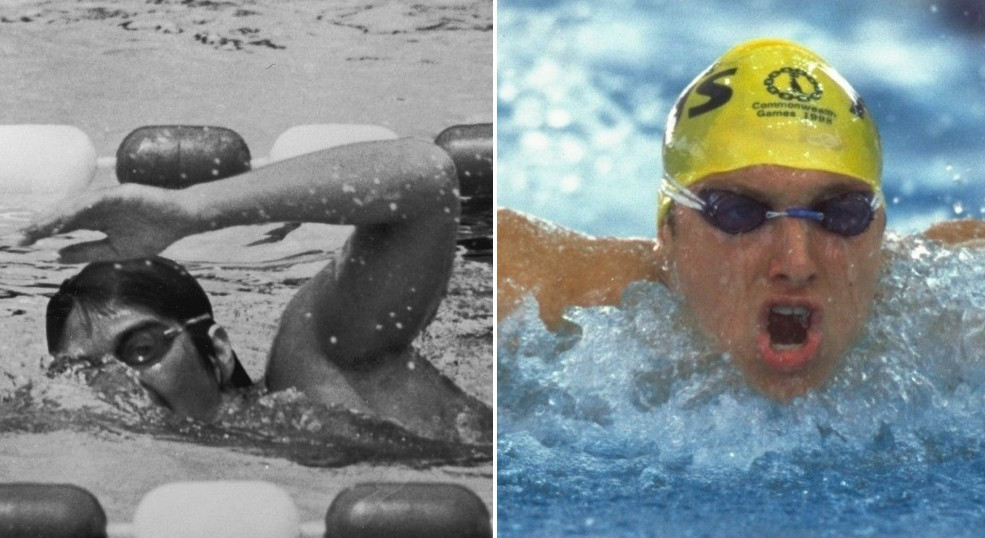 If there is one sport at the Commonwealth Games that Australia loves more than any other, it is swimming.

By the end of Glasgow 2014, where they were again the most successful nation in the pool, they had won a total of 654 medals in swimming - of which a remarkable 269 had been gold.

But there are two swimmers who stand on the shoulders of these giants - Dawn Fraser and Ian Thorpe. They both won four gold medals in a single Commonwealth Games with performances that will be remembered forever.

Fraser's four gold medals came at Perth 1962, an achievement she ranks as one of the favourite moments of her career along with her victory at the 1956 Olympic Games in Melbourne.

Arguably, though, her most significant achievement was being the first woman to swim the 100 metres freestyle in under one minute, something she achieved in the Australian trials for Perth 1962.

It was a feat described by sportswriter Ray Chesterton "as a fluorescent milestone in world sport, equal in gravitas to Nadia Comăneci's perfect 10s in gymnastics at the 1976 Olympics in Montreal and Roger Bannister's four-minute-mile barrier in athletics".

It was a time that Fraser then lowered another two times, including on her way to winning the Commonwealth Games gold medal at Perth in 59.5sec.

During those events in Perth, a 16-year-old Scottish swimmer called Louise Campbell made her first mark at international level - reaching the finals of the 110yds backstroke and 220yds backstroke. After retiring from swimming at the age of 21, she married Ian Martin and begun her career in sports administration which in 2015 saw Louise Martin elected as President of the Commonwealth Games Federation.

During Fraser's career she also held 39 world records and won eight Olympic medals, which just goes to show the Aussie dominance in the pool is nothing new.

Fraser was also the first athlete to win three consecutive Olympic gold medals in the 100m freestyle at Melbourne 1956, Rome 1960 and Tokyo 1964.

Fraser retired to a life as a publican and then a politician which saw her honoured as the Australian of the Year in 1964; inducted into the International Swimming Hall of Fame in 1965; made a member of the Order of the British Empire in 1967; an Officer of the Order of Australia in 1998 and also Australian Female Athlete of the Century in the same year; as well as the Australian Female Athlete of the Century by the Sports Australia Hall of Fame and its first female member in 1995 and the World's Greatest Living Female Water Sports Champion by the International Olympic Committee in 1999.

She was also one of the Torch bearers of the Olympic flame at the Opening Ceremony of the 2000 Olympics in Sydney - carrying the Torch into the stadium as one of the final bearers before Cathy Freeman lit the cauldron.

"I still take great interest in swimming and can't wait for the Commonwealth Games [in the Gold Coast] - they are going to be great," Fraser said.

"I have been lucky enough to contest two home Games - the Olympics of 1956 and then the Perth Commonwealth Games of 1962.

"And I always have a soft spot for our girls who have done such an amazing job in recent years.

"I am so proud of all of our female swimmers, who are continuing the traditions we established in the 50s and 60s."

Nearly four decades after Fraser's retirement another Australian swimmer captured the imagination of the world.

Few other words could aptly describe the arrival of 15-year-old Sydney schoolboy Ian Thorpe who dominated the men's meeting at the 1998 Commonwealth Games in Kuala Lumpur despite being two years younger than any other member of the Australian team.

After four gold medals, Talbot declared that the 6ft 5in Thorpe "may be the swimmer of the century".

Thorpe's first gold medal of the 1998 Commonwealth Games came in the 200m freestyle, where he won in a time of 1min 46.70sec, just one hundredth of a second outside of Italian Giorgio Lamberti's world record.

It was the beginning of the "Thorpedo" era as Ian Thorpe quickly became the golden boy of swimming in the lead up to the 2000 Olympics in Sydney.

Funny thing is, Thorpe began swimming because he felt like a "fish out of water" at other sports, like cricket, at which his father Ken had excelled. "No coordination at all on land," a classmate at East Hills Boys Technical High School told The Australian newspaper.

At first, he was equally discomfited in a pool, so initially allergic to chlorine that the thought of getting any in his nose or mouth made him swim with his head out of the water until he adjusted to it. His mother once told Thorpe's lifelong coach, Doug Frost, that she took Ian and her daughter, Christina, to the pool because it was cheap baby-sitting.

It certainly paid dividends. Thorpe finished his career with a total of nine Olympic medals, including five gold, and he added to his Commonwealth Games haul with an incredible six gold at Manchester 2002 to end with a total of 10.

Thorpe now runs "Ian Thorpe's Foundation for Youth". The organisation raises money to fund projects that improve the health and education of indigenous children. Just before Glasgow 2014, Thorpe also revealed he is gay.

In January, Thorpe carried the Queen’s Baton when it passed through his home city Sydney on its way to Gold Coast 2018. "I have some very fond memories of the Commonwealth Games," said Thorpe. "They were a big part of my career."