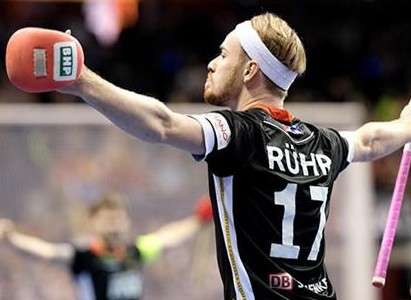 Hosts Germany justified their top ranking at a packed Max-Schmeling-Halle in Berlin tonight as they reached the men’s final of the Indoor Hockey World Cup, with Christopher Ruhr scoring a hat-trick in their 6-2 win over Iran.

Germany’s opponents in tomorrow’s final - the fifth of its kind - will be Austria, who overcame the challenge of a strong  and direct Australian side to win their semi-final 2-1.

The host team also reached the women's Indoor World Cup final thanks to a 3-2 win over Belarus, and will now contest gold with defending champions Netherlands, who reached their fifth successive final with a 6-1 win over Ukraine.

Ruhr compounded his position as the leading scorer in this International Hockey Federation (FIH) competition in raising his overall tally to 18 with the noisy approval of the crowd of 8,000 in the arena.

Ruhr sent a penalty stroke over the bar after just four minutes, but thereafter he made no mistake, scoring twice to help Germany to a 3-1 half-time lead, and scored early in the second half to send them on their way forwards.

"We used the energy of the crowd, it certainly wasn't a problem with nerves," said Germany’s captain Martin Haner,

"But at times it was so loud out there we had trouble communicating.

"It was something we had to get used to but we won't find it a problem in the final."

The second semi-final was a tighter match, and it was not until the 20th minute that Austria broke the deadlock as their captain Michael Korper scored with a powerful penalty corner.

Australia equalised early in the second half through James Knee, but Korper settled the match with a variation on his earlier theme as he scored a second with a slipped penalty corner strike that evaded the outstretched legs of the keeper.

The final will thus be a re-run of the semi-finals of the EuroHockey Indoor Championships a month ago.

On that occasion Austria won on shoot-out and went on to become European Indoor champions.

Can they repeat that feat at World Cup level?

The final day of action will see Australia and Iran contest bronze at 12pm, with Germany and Austria starting the gold medal match at 3pm.

Earlier in the day, Belarus had earned a semi-final place in the women’s event with a 5-2 win over a valiant Australia side, while Germany  had progressed with a 3-1 win over Poland.

Ukraine won their quarter-final against Switzerland by 8-3, and their next opponents were established by a devastating 8-3 win over the Czech Republic by The Netherlands.