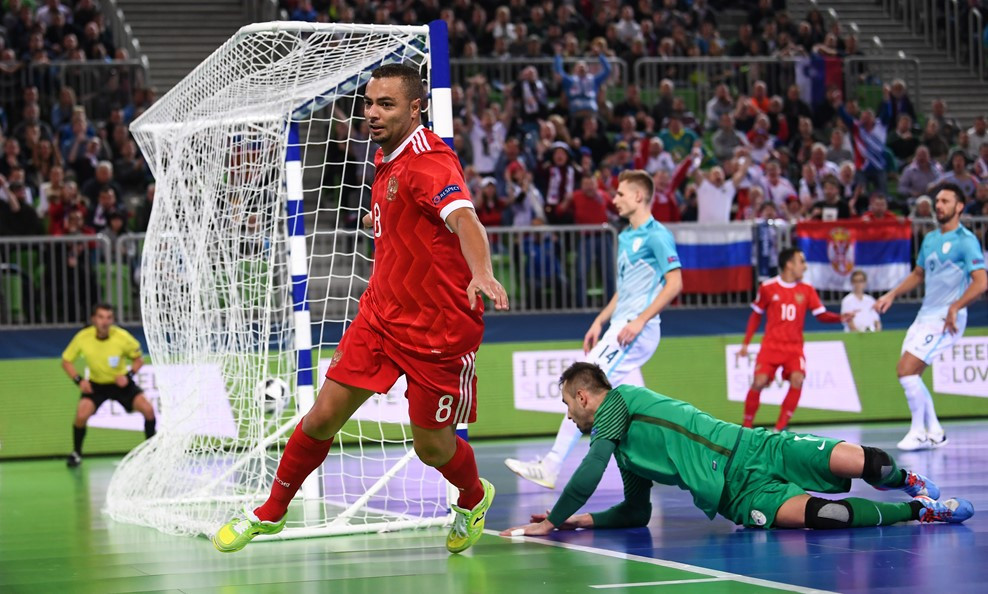 Russia and Kazakhstan made it to the last four of the UEFA Futsal Championship in Ljubljana after victories in their quarter-finals at the Arena Stožice.

The first half of the quarter-final between five-time silver medallists Russia and hosts Slovenia was a cagey affair and neither side managed to find the back of the net before the break.

Russia, however, took the lead through Eder Lima just six minutes after the restart before consolidating their victory just one minute from time thanks to Robinho's strike as Slovenia took more risks to try and save the game.

After his side's 2-0 victory, Lima said: "I am happy about my goal but I am much happier for the team.

"Our group matches were not as good as we expected but tonight we raised our game and I expect we will do the same in the semi-final."

Russia will now face the winner of tomorrow's quarter-final between Portugal and Azerbaijan.

The other quarter-final of the day saw Group B winners Kazakhstan secure their place in the last four with a 3-1 victory over Serbia.

The 2016 bronze medallists took control of the match very early on through Serik Zhamankulov's sixth-minute strike before Tanyan doubled their lead on the 22-minute mark.

Kazakh pulses were racing towards the end of the match when Serbia's Slobodan Rajčević scored to reduce his side's deficit to just one goal.

However, Douglas Jr secured the win and a semi-final place for Kazakhstan just 20 seconds from time.

Kazakhstan will now face the winner of tomorrow's quarter-final between defending champions Spain and Ukraine.

At the Asian Futsal Championship, two of the four quarter-final ties were decided following the conclusion of matches in Groups A and B.

Vietnam finished top of Group A after recovering from a goal down against hosts Chinese Taipei to eventually win 3-1 thanks to three goals in the last 11 minutes at the Xinzhuang Gymnasium in New Taipei City.

This result meant that Bahrain's 3-1 win against Malaysia was enough for them to take the second qualifying spot ahead of Chinese Taipei.

Bahrain will now face Japan, who finished top of Group B after coming from a goal down against Uzbekistan to eventually win 4-2.

Shota Hoshi was the star performer for the Japanese with two goals for his side.

Uzbekistan had already qualified prior to today’s defeat but their second-place finish in Group B means they must now face Group A winners Vietnam in their last-eight clash.

The Group B dead-rubber between already-eliminated Tajikistan and South Korea ended in a convincing 7-0 victory for the former.

Tomorrow will see the final matches of Group C and D played out.