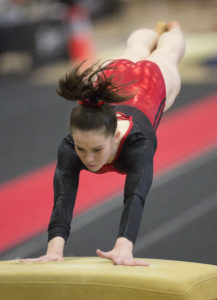 Gymnastics New Zealand have added two 15-year-old athletes to their squad for the this year's Commonwealth Games in the Gold Coast.

Stella Ashcroft will represent the country in artistic gymnastics, while Stella Ebert has secured a place in the rhythmic squad.

Ashcroft was selected for her strength in the vault and beam disciplines.

She won gold, silver, and a team bronze at the Junior Commonwealth Championships, as well as having claimed medals at the Australian and New Zealand Championships, respectively, last year.

Ashcroft is due to compete in her first senior competition a World Cup event in Melbourne this month, as she builds towards the Games.

The 15-year-old will join David Bishop, Mikhail Koudinov, Devy Dyson, Kyleab Ellis and Ethan Dick, who have been named in the men’s artistic team.

Ebert will represent New Zealand in rhythmic gymnastics, having impressed during her first year of senior competition in 2017.

"What I have not seen is all the hours of training and sweat and tears that is always behind a competition performance.

"These selections are testament to the long hard yards that the girls have put in over the last 18 months and I’m excited for both them and our community, to see them perform up on that Commonwealth stage."

The gymnasts are the youngest athletes selected by New Zealand to date for the Games.

A total of 92 athletes have now been selected to New Zealand’s team for Gold Coast 2018, set to take place from April 4 to 15.