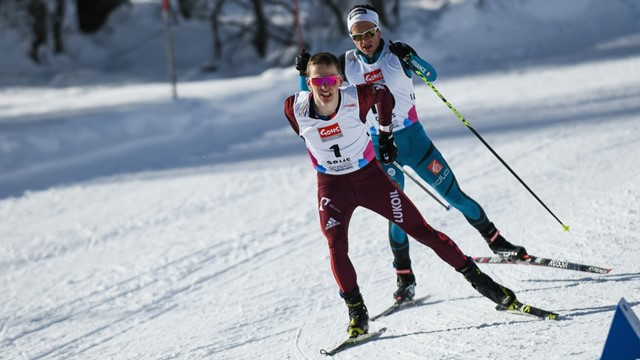 Spitsov lived up to his billing as favourite in Goms, clocking a time of 1 hour 18min 14.9sec to beat nearest challenger Jules Lapierre of France by 2.9 seconds.

"I had no race tactics," Spitsov, who has qualified for the upcoming Pyeongchang 2018 Winter Olympic Games, said.

"I trusted in my final speed."

In the women's event, Sedova led a Russian podium sweep with a time of 44:03.6

Both Sedova and Nepryaeva will travel from Goms to Pyeongchang for the Winter Olympics.

There was also ski jumping action held in Kandersteg today as Slovenia's Nika Kriznar eased to victory in the women's individual normal hill event with 262.6 points.

The 17-year-old produced the longest jump of the day in the first round with 104 metres and then sealed success with a 100m jump in the second.

Ema Klinec ensured a one-two finish for the Slovenian team after scoring 248.3 points.

Both she and Kriznar were also in the top three at the 2017 FIS Nordic Junior World Ski Championships in Park City in the United States, where they finished second and third respectively behind Italian Manuela Malsiner.

Competition in Switzerland is due to continue tomorrow.