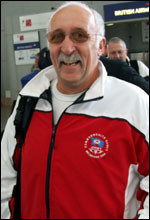 Jersey are hoping to be part of a coalition of countries that will persuade the Commonwealth Games Federation (CGF) to include shooting on the programme for Birmingham 2022.

The petition, launched on the Change.org website by British specialist publication the Shooting Times, has attracted nearly 35,000 signatures since it was published earlier this week.

CGF chief executive David Grevemberg made it clear yesterday, though, that they would not put pressure on Birmingham 2022 to reverse their decision.

But Commonwealth Games Association of Jersey President Paul du Feu has claimed, though, that remains a lot of anger about the decision.

The topic is expected to be raised at the CGF General Assembly in April on the eve of this year's Commonwealth Games in the Gold Coast.

Shooting, which has been contested at every Commonwealth Games since Kingston 1966, with the exception of Edinburgh 1970, currently features on the CGF's list of optional sports from which a Games host city can include up to seven.

Fullbore shooter Colin Mallett won Jersey’s only Commonwealth Games gold medal at Auckland in 1990, and teamed up at the same Games with his father, Cliff, to claim bronze in the pairs.

"They’re really cutting us off at the knee caps," du Feu told the Jersey Evening Post.

"If we get the opportunity to speak at the Commonwealth Games Federation meeting in the Gold Coast they can expect Jersey to stand up and make a point.

"It is a democracy, and if you get enough small nations like the Isle of Man, Jersey, Guernsey, Gibraltar alongside India and Australia then suddenly there’s a bit of movement.

"I hope that they will re-think."

Birmingham 2022 claim the decision is due to the lack of a suitable venue close to the city.

The petition, however, points out that the nearest Olympic-standard shooting range to the city is 130 miles away in Bisley in Surrey.

This is five miles closer to Birmingham than London's Velodrome on the Queen Elizabeth Olympic Park, which Ward confirmed would host track cycling at Birmingham 2022, according to the petition.