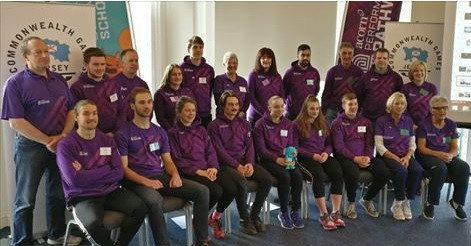 Guernsey and Jersey have announced their full and provisional lineups for next year's Commonwealth Games in the Gold Coast.

The Guernsey Commonwealth Games Association’s (GCGA) announcement published the final lineup that will travel to Australia.

The island plan to send 33 athletes to represent them in eight sports.

He represented Britain at the 2012 Olympics and was the highest placed home runner, finishing in 30th place.

Merrien is joined by Alastair Chalmers, who broke a 25-year-old British record to win gold in the 400 metres hurdles at the Commonwealth Youth Games in the Bahamas earlier this year.

The 17-year-old triumphed in 51.21 seconds to set the fastest ever time by a British under-18 athlete.

Chalmers is the younger brother of Cameron, who was selected to Britain in the 4x400m relay at the International Association of Athletics Federations World Championships in London earlier this year.

He is also included in Guernsey's team for Gold Coast 2018, due to take place between April 4 and 15.

"Congratulations to all 33 athletes selected and I’m delighted that we have eight sports represented at the 2018 Gold Coast Commonwealth Games," GCGA chairman David Harry said.

“I would like to thank our Validation Committee, Dave Chilton, Roy Martel, Helen Bailey and Jay Ap Sion for all their hard work over the last 18 months in working with the sports validating the sport criteria and application forms.

"I would also like to thank Angela Stuart and Garry Collins for their continuing hard work in getting the team ready for the Gold Coast."

Guenrsey made their debut in the Commonwealth Games at Edinburgh in 1970.

Since then they have won six medals, including a gold for Adrian Breton in rapid fire pistol at Auckland 1990.

Guernsey, however, have not won a medal since Victoria 1994 when Breton and Graham La Maitre claimed bronze in the rapid fire pistol pairs.

Unlike Guernsey, island neighbours Jersey are yet to announce their full lineup.

The Commonwealth Games Association of Jersey have named the initial group of 29 athletes to be selected for next year’s event with four more set to be added by the end of the year.

The announcement was made at Hotel de France in the presence of athletes, team managers and CGAJ management.

Like Guernsey, Jersey made their first Commonwealth Games appearance at Edinburgh in 1970.

They have won four medals, including a gold at Auckland 1990.

That was won by Colin Mallett won the open full bore rifle competition.

Jersey have not won a medal since.

The aforementioned four remaining places are likely to be contested by athletes from shooting, swimming and table tennis.