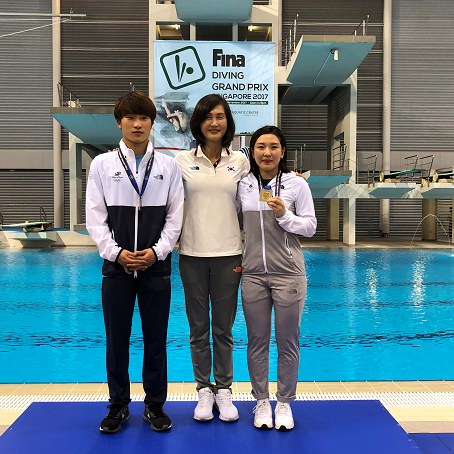 South Korea dominated the opening day of the latest International Swimming Federation (FINA) Diving Grand Prix as they won both finals in Singapore.

Their total was enough to beat Kyle Kothari and Scarlett Mew Jensen of Britain, who were forced to settle for silver on 275.04.

Kim Yeongnam and Cho Eunbi then triumphed in the mixed synchronised platform event, beating only challengers Kothari and Eden Cheng.

The South Korean pairing scored 290.10 to comfortably overcome their British rivals, whose dives were rewarded with an overall 274.26.

Chinese world champions Pian Jianfeng and Wang Han also enjoyed a successful first day of the event in Singapore as they were the top qualifiers in the men's and women's 3m springboard competitions respectively.

Jianfeng led the way in the men's event with a score of 451.60, with South Korean diver Haram Woo following in second place on 439.90.

Liu Cheng Ming, also of China, was third after recording a total of 437.15.

Wang finished at the summit of the women's 3m springboard standings on 347.30, comfortably in front of nearest challenger and compatriot Chen Yiwen, who amassed 320.40.

Jensen rounded off the top three qualifiers with a score of 266.40.

Pian and Weng will return to try and win gold tomorrow when the finals in both events take place.

Finals will also be held in the men's and women's synchronised 10m platform competitions.