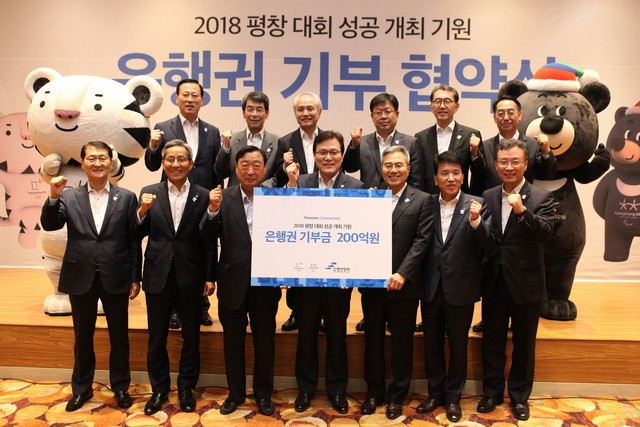 The signing of the agreement with the Federation of Korean Banks was attended by Lee Hee-beom, President of Pyeongchang 2018, and representatives of the Finance Committee of the Korea Development Bank.

The agreement was made after KEB Hana Bank, an official sponsor of the Pyeongchang Olympic Games, and the National Federation of Korean Banks decided last month to discuss cooperation to ensure the success of the events.

Bank representatives were brought on a tour of the Olympic Stadium, which will host the Olympic Opening and Closing Ceremonies, the Alpensia Ski Jumping Stadium and the Gangneung Olympic Park.

"This donation will be a great help in promoting the Pyeongchang Olympic Games and the successful hosting of the Olympic Games," Lee.

"I am confident that the Pyeongchang Winter Olympic Games will be a successful festival of peace and harmony that will enhance the national character and pride of the Republic of Korea."

The donation is certain to be a very welcome boost to Pyeongchang, given the poor ticket sales.

Pyeongchang 2018 admitted last week that so far less than 500 tickets for the Paralympic Games, due to take place between March 8 and 18 next year, have been sold to individuals.

Things are slightly better for the Olympic Games, scheduled to be held between February 9 and 25, but even for that event only 31.9 per cent of the 1.18 million tickets have been sold so far.

International Paralympic Committee President Andrew Parsons has warned Pyeongchang 2018 and the South Korean Government that progress in the awareness and engagement areas is "essential" following dismal ticket sales for the event.

Parsons recently urged Pyeongchang 2018 and South Korean President Moon Jae-in to ensure there is more engagement with the country's public in the build-up to the Winter Paralympics.

The preparations for the Games also take place at a time of ongoing tensions on the Korean Peninsula, given the missile tests by North Korea, and the war of words between its Supreme Leader Kim Jong-un and United States' President Donald Trump.

While still not confirmed, there is a clear desire in Seoul that North Korea should take part in the Games.