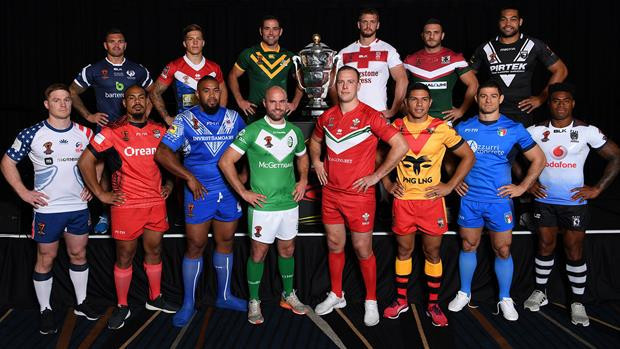 Captains and coaches of all 14 nations set to compete at this year’s Rugby League World Cup have gathered in Australian city Brisbane today to officially launch the tournament.

The 15th edition of the sport's flagship event, scheduled to start on Friday (October 27), will be played in 13 cities across Australia, New Zealand and Papua New Guinea.

Tournament chief executive Andrew Hill and chairman Dr George Peponis were on hand to launch the 28-game series that culminates with the final in Brisbane on December 2.

The event is due to begin on Friday (October 27) with a clash between defending champions Australia and century-old rivals England at the Melbourne Rectangular Stadium.

The two teams, coached by iconic Queensland league figures Mal Meninga and Wayne Bennett respectively, feature in Pool A along with France and Lebanon.

Pool B is made up of New Zealand, Samoa, Scotland and Tonga, while Pool C comprises Ireland, Papua New Guinea and Wales.

Fiji, Italy and the United States will contest Pool D.

The new international eligibility rules are expected to ensure the 2017 World Cup is the most competitive and most watched edition in history.

Matches will be telecast by the Seven Network in Australia, Sky TV in New Zealand and EMTV in Papua New Guinea.

"The World Cup is huge for our game," Australia captain Cameron Smith said at the launch.

"We don’t have fond memories of the last World Cup in Australia in 2008 [when they lost 34-20 to New Zealand in the final] so we want to turn that around.

"It’s a celebration of our game and I think everyone who gets involved with this tournament and comes out and sees all the matches is going to be for a treat.

"There is going to be some great football played and there are some wonderful players on show throughout this tournament so I can’t wait.

"All the guys are really looking forward to getting out there on Friday night, they are excited about this campaign.

"I think a lot of the focus and a lot of the talk from Mal and from myself is going to be about playing a good game of footy on Friday night because if you get beaten in that first game you put yourself into a tricky position heading into quarter finals and semi-finals."

England captain Sean O’Loughlin said he and his team-mates are looking forward to playing in the tournament under Bennett, who is considered the most successful Australian rugby league coach in history.

"I think he just puts the boys under pressure to do the basic things well," O’Loughlin said.

"He has a heap of experience and I think the boys are feeding off that.

"From our point of view, we want to get off to a good start but we also want to be building towards the knock out rounds and getting better week in and week out."

Peponis said the World Cup would not only be the best-ever, but would leave a legacy for rugby league.

"There has been plenty of hype around the eligibility rules which have shown that the Rugby League World Cup 2017 will be the most competitive World Cup," Peponis said.

"I would like to thank all our corporate partners as well as our Government partners.

"In particular I’d like to thank the Queensland Government for their support, with Brisbane set to host a semi-final and the final."

The first edition of the Rugby League World Cup was held in France in 1954.

Since then, Australia have won seven of the last eight tournaments, including four years ago when they beat New Zealand 34-2 in the final in Manchester in England.