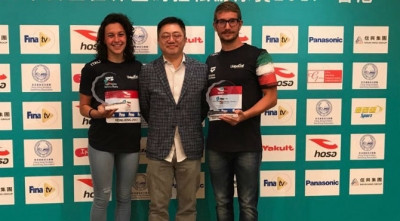 Bridi produced a superb display over 10 kilometres in Repulse Bay to triumph in a sprint finish by just one tenth of a second in 2 hours 2min 12.60sec.

Ana Marcela Cunha of Brazil, the winner of the previous World Cup leg in Chun'an County last week, battled hard but was forced to settle for second place.

"I managed to put all the progress made during the year and the teachings of my technician Fabrizio Antonelli in the water," Bridi said afterwards.

"Winning the World Cup means so much because it means I've been there for so many months, despite so many important appointments and appointments."

Dutch Olympic champion Ferry Weertman was forced to settle for second place in 1:53.11.10.

Brazil featured on the podium again as Allan de Carmo clocked 1:53.11.2 for third.

His performance was enough for the overall World Cup spoils, however, subject to official confirmation by FINA.