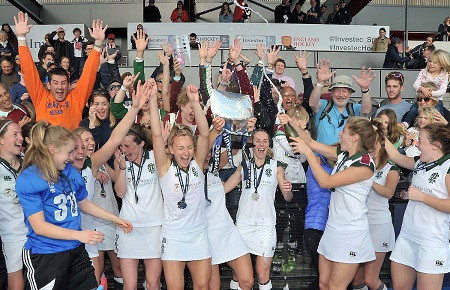 Surbiton Hockey Club, in the south London suburb of Kingston upon Thames, will host the EuroHockey Club Cup (EHCC) in May 2018, it has been announced.

This is the first time that an English club will hold the EHCC in its new format since the launch in 2010.

Surbiton Ladies have qualified for the last three tournaments, all held in The Netherlands.

Along with Surbiton, the strong field is led by the current champions and Europe’s most successful team HC‘s-Hertogenbosch from The Netherlands,  joined by fellow Dutchwomen AHBC Amsterdam.

In addition to hosting this top event, the second edition of the Junior EHCC will take place over the same weekend.

Letters of invitation to all the teams playing in the EHCC have been extended to their under-14 girls' teams to participate in the newest European Hockey Fedearation (EHF) women’s event.

"At the core of the EHF is our clubs," EHF President Marijke Fleuren said.

"There is simply nothing like players playing with their team mates that they have known for years.

"I am really delighted that we are bringing this competitive, top-class event to England, home of the current Olympic champions.

"We know that the huge fan base in England will be excited to see the best of the best women players compete on their home soil."

Surbiton’s Club captain, Mark Waller, said: “It is a huge honour and opportunity, not only to showcase the very best of European women's club hockey, but also to host the next generation of talent who will participate in the Junior EHCC tournament.

"Hosting the tournament will help us to further increase the visibility and levels of support for hockey in this country, already on a high following the GB women's success in Rio last year, and ahead of the Women's Hockey World Cup, which will take place in London in July 2018.

"We also look forward to welcoming the other competing teams and their supporters, EHF officials, sponsors and the media to Surbiton.

"The club will work hard to ensure that participants and visitors alike enjoy a fantastic weekend of hockey and being part of the wider hockey family."

The announcement by the EHF means that the top three women’s European competitions will all be held in either Great Britain or Ireland, with the second tier trophy having previously been awarded to Dublin and the third tier Challenge I tournament scheduled to be held in Edinburgh.