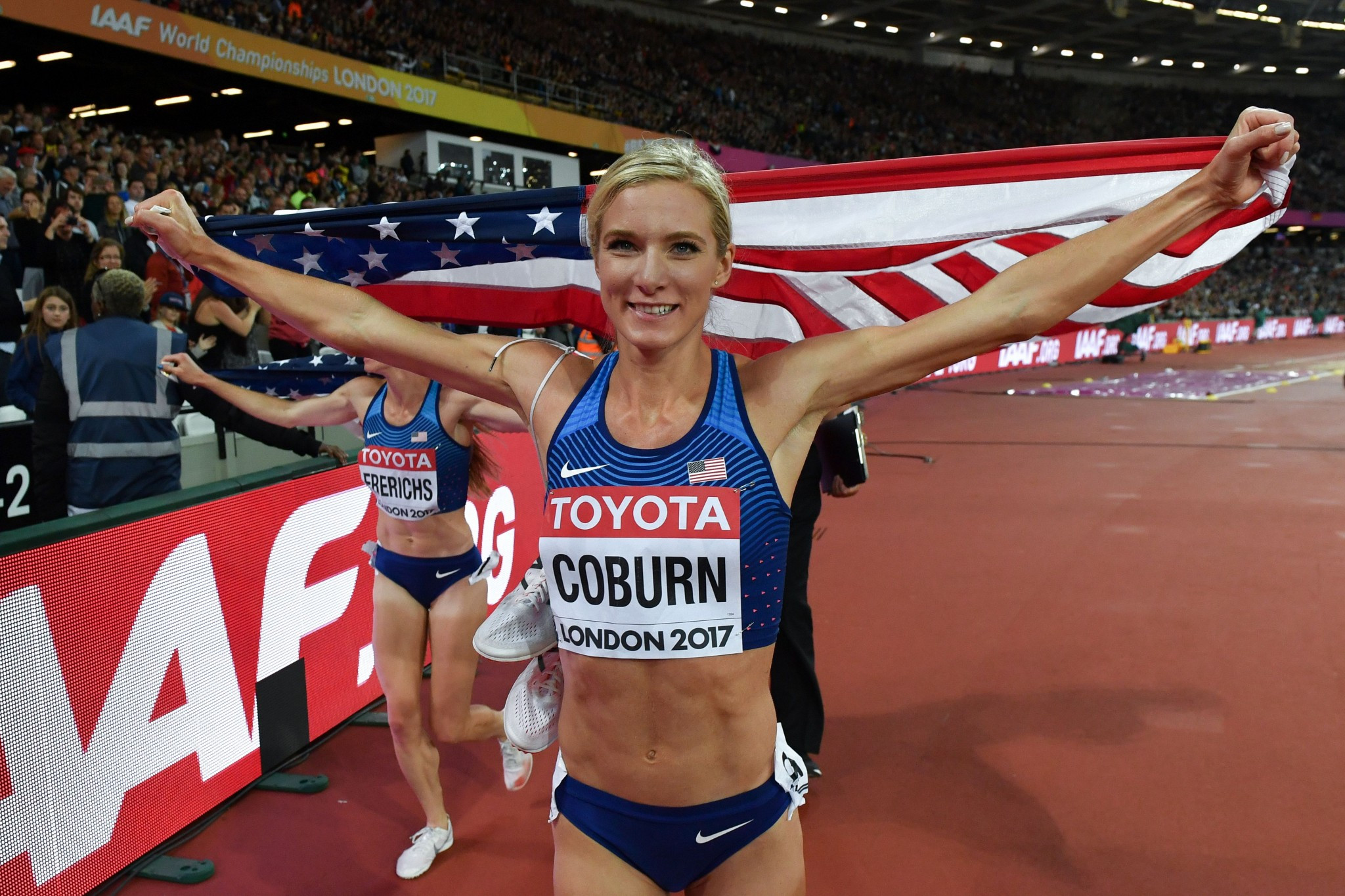 Emma Coburn became the first athlete to break a record at the International Association of Athletics Federations (IAAF) World Championships here as she led home an American one-two to emerge victorious in a bizarre and dramatic 3,000 metres steeplechase race.

The 26-year-old American broke the Championship record as she clocked 9min 02.58sec in an event which will be remembered for Kenyan runner Beatrice Chepkoech inadvertently missing the first water jump.

Dafne Schippers of The Netherlands justified her billing as the favourite in the women's 200m, successfully defending the title she clinched in Beijing two years ago with another assured display of sprinting.

The 200m was the standout event on tonight's programme but it was the longer and less heralded event that will be the talking point from day eight of these Championships.

Coburn, the Olympic bronze medallist at Rio 2016, timed her late surge for the line to perfection in an enthralling race as she finished in front of compatriot Courtney Frerichs, who clocked 9:03.77, 16 seconds faster than she had ever run before.

It marked the first time the US had ever won medals in the women's steeplechase event.

Defending champion Hyvin Kiyeng Jepkemoi was unable to retain her crown but finished third in 9:04.03.

The race began in farcical fashion as Chepkoech demonstrated an incredible lapse of memory and did something rarely seen at this level.

The 26-year-old made an inexcusable mistake as she ran past the first water jump without actually leaping over the hurdle.

She then turned round and successfully tried again before joining the rest of the pack and gradually eating into a gap that she herself had created.

Having competed at numerous major events throughout her time on the track, she really should have known better.

Further ahead, Olympic champion and world record holder Ruth Jebet of Bahrain looked in good form, controlling the pace from the front during the middle section of the race.

When it came to crunch time, however, the Kenyan-born athlete slowed and was dropped by the leaders.

It was here where Coburn seized her opportunity as she kicked on, completing the water jump with ease before she found another boost in speed to clinch a superb triumph.

The 26-year-old could scarcely believe it as she crossed the line before she enjoyed an emotional embrace with silver medallist Frerichs, who had edged clear of Jepkemoi.

"What a race to be part of," said Coburn.

"I have memories from 2015 and 2016 where I went too early for the last push, so I just had to keep trusting myself and be patient, and it looks like it paid off.

"I never expected to win in that time but I kept pressing.

"It is pretty amazing to get a Championship record.

"I was expecting a challenge from when I hit the front.

"I just expected the others to finish quickly, so I just kept pushing to make sure I got that gold that I wanted so much."

The 200m was unable to provide the drama of the preceding 3,000m steeplechase but still proved to be an absorbing battle.

As well as the main draw of Schippers, the race featured two athletes desperate for redemption having missed out on glory earlier in the week.

Ivorian Marie-Josée Ta Lou was only beaten to the 100m gold medal by a diving Tori Bowie of the United States, while Shaunae Miller-Uibo of The Bahamas was attempting to banish the demons of the unforgettable finish to the 400m two nights ago.

Miller-Uibo was well on course to add the world title to the Olympic crown she earned at Rio 2016 before an extraordinary breakdown just 20m from the line, where she stumbled after losing concentration, dashed her hopes of victory.

The duo came into the race as the biggest threats to Schippers and so it proved as Ta Lou ran the Dutchwoman close but was forced to settle for an agonising silver yet again in 22.08.

Schippers used her long, powerful stride to nudge clear of the rest of the field to claim her fifth World Championships medal.

Miller-Uibo was 0.07 seconds adrift in third place, her bronze medal - her first over this distance at either the Olympic Games or World Championships - offering some consolation from a difficult Championships.

"It was very important to win," said Schippers.

"I worked so hard in the last years and last year was not the easiest for me.

"I changed everything and got a new coach, so I'm very happy.

"It's great, especially with a gold medal, I am very pleased.

"My secret is enjoying the sport and enjoying my racing.

"I feel a little bit nervous starting out, but I'm a final runner and I'm grateful for the experience now it's over."

The US remain comfortably clear at the top of the medals table with eight golds, eight silver and seven bronze for a total of 23.

Kenya are second with on three golds, a silver and a bronze.

Poland are the surprise occupant of third place having won two medals of each colour so far.