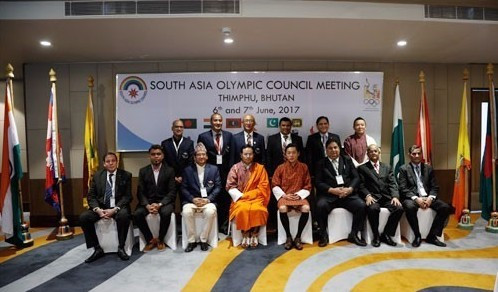 Development of sport in the region was high on the agenda during a meeting of the South Asian Olympic Council (SAOC), hosted by the Bhutan Olympic Committee (BOC).

A range of items were discussed, including the dates for next year's South Asian Games in Nepal's capital Kathmandu.

The participating officials also looked at finalising proposed amendments to the SAOC constitution, which have not been made public.

"It has been 12 long years since and most of the Presidents and secretary generals of the South Asian Olympic Committees have changed.

"However, what has not changed is our commitment, our energy and our zeal, to promote sports in our region.

"The Royal Government of Bhutan and the Bhutan Olympic Committee are working to make Bhutan a sporting country, one with a vibrant sporting culture.

"We are committed to make sport a part of our daily lives by putting in place an enabling environment for the overall development of sports.

"An important step towards this aspiration is the development of a National Sports Policy and the cabinet has recently commissioned the development of the national sports policy that will provide the strategic direction and bring together all actors in making Bhutan a sporting nation."