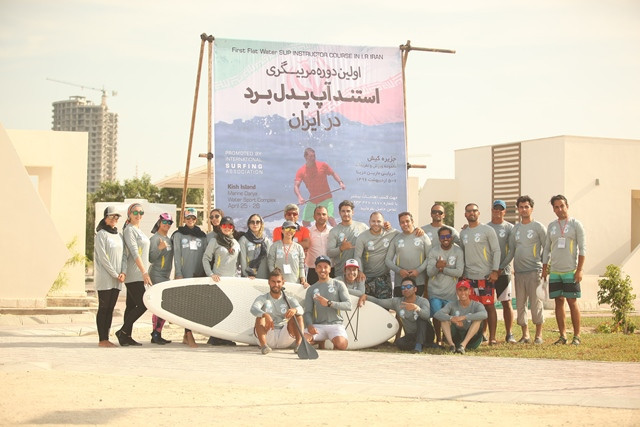 The International Surfing Association (ISA) has held its first development programme for stand up paddle (SUP) in Iran in an effort to "drive the global growth and reach of the sport".

The programme, which was held alongside the Islamic Republic (IR) of Iran Surfing Association, was led by official ISA course presenter Andy Joyce and took place on Kish Island in the Persian Gulf before going to the Ashgabad Lake, located south of the country's capital Tehran.

Over 30 people from nine provinces participated in the course designed so that trained Iranian instructors can now spread the sport throughout the country.

The IR Iran Surfing Association joined the ISA as its 100th member in June 2016.

They are planning to build upon the success of this course by organising an ISA surf level one training course in the future.

“It’s amazing to witness the impact that SUP is having in Iran to create positive social change – promoting gender equality and engaging the youth to ensure a bright future for the sport," said ISA President Fernando Aguerre.

"The ISA has been the only International Federation leading the global growth and development of SUP for nearly a decade.

"This course in Iran exemplifies the efforts that the ISA has undertaken to foster the growth of the sport.

"In recent years we have seen exponential growth of SUP in non-traditional Surfing nations such as Russia, China, and India, to name a few, all due to ISA leadership and initiatives."

SUP boarding, an activity which has enjoyed huge growth in recent years, features athletes standing on a board and using a long paddle to move.

It therefore features elements of both surfing and canoeing.

This point is disagreed with by the ICF, who say they have been involved for "a number of years"