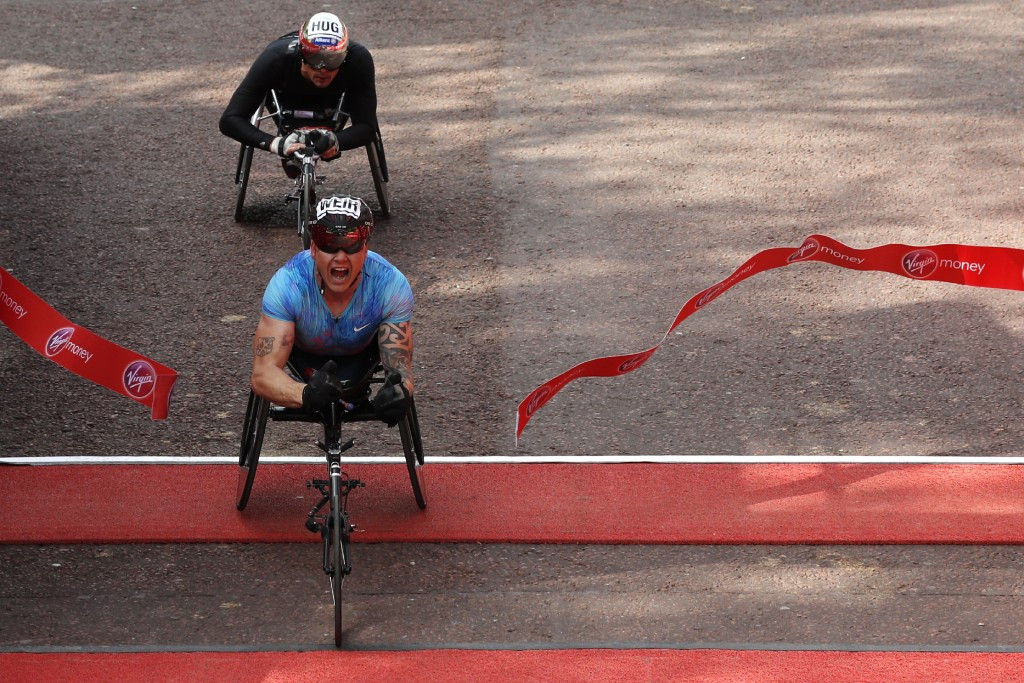 Weir and defending champion Hug formed part of a large group during the opening half of the 26.2 mile race, hitting the midway point in 44min 04sec.

The two men continued to set the pace at the front of the field as it gradually reduced in size as the finish approached.

Victory was eventually decided by a sprint finish, Weir coming out of his rival’s slipstream to produce an impressive turn of speed.

The 37-year-old, winner of the Paris Marathon earlier this month, crossed the line in a winning time of 1 hour 31min 06sec.

Weir’s triumph was his first at his home marathon since 2012 and the six-time Paralympic gold medallist reversed his recent record of defeats to Hug.

It also meant he was the most successful wheelchair racer in the history of the London Marathon, having previously shared the record with Baroness Tanni Grey-Thompson.

The Swiss racer was forced to settle for second, crossing the line one second behind the home favourite.

As Weir was racing independently from his nation, Hug took the victory in the World Para Athletics Marathon World Cup series.

Switzerland’s Manuela Schär justified her status as the favourite for the women’s title, following defending champion Tatyana McFadden pulling out for health reasons.

Schär, second to the American for the last three years, ok full advantage of the American’s absence to secure a maiden London Marathon title.

The Swiss racer backed up producing the fastest time ever by a women’s wheelchair race last week at the Boston Marathon.

Schär completed the distance in a time of 1:39:57, giving the 32-year-old a second course record within a week.

The United States’ Amanda McGrory and Susannah Scaroni completed the top three, ending in times of 1:44:34 and 1:47:37 respectively.

He completed the course in 2:28:20, with Morocco’s Abelhadi El Harti ending over a minute adrift.

Patryk Lekaszewski won the visually impaired T13 event as the Polish athlete ended in 2:32:20, while Japan’s Shinya Wada finished in 2:34.59 to triumph in the T11/12 class with his guide.

Five athletes contested the women’s T11/12 event, which would also be won by a Japanese athlete.

Misato Michishita completed the course in 3:00.50, with Spain’s Maria del Carmen Paredes Rodríguez second by crossing the line in 03:09:41.