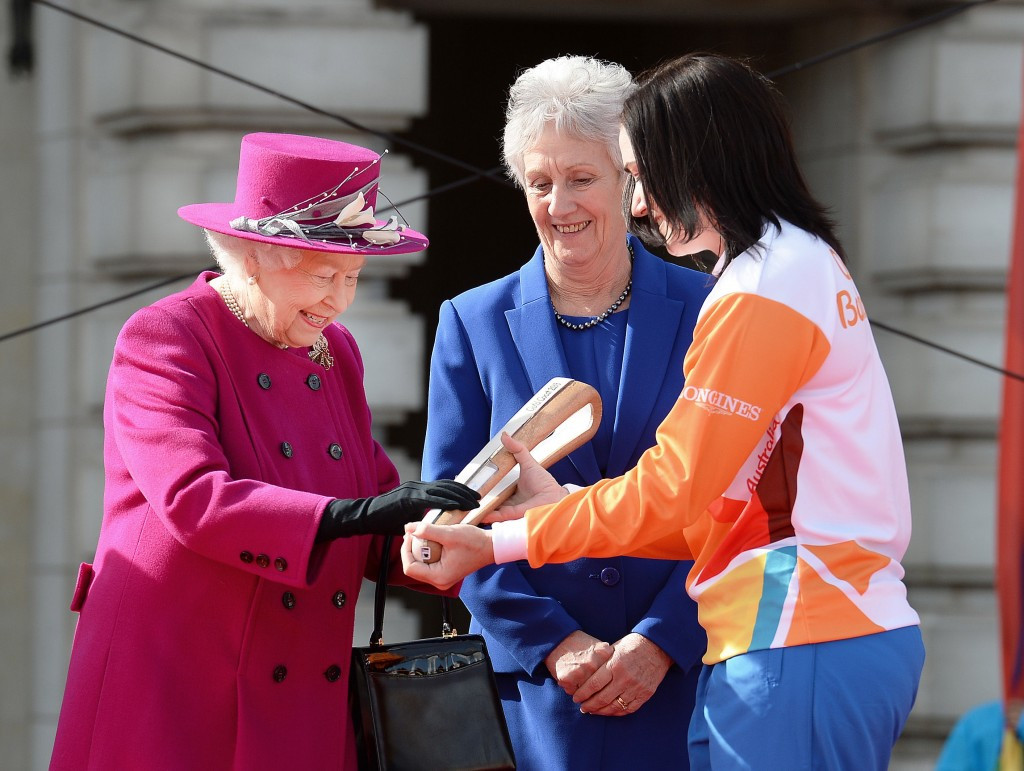 The Queen has officially launched the Queen's Baton Relay for next year's Commonwealth Games in the Gold Coast at a ceremony here today.

Joined by her husband Prince Philip, the Duke of Edinburgh, and their son Prince Edward, the Earl of Wessex, The Queen placed a special message into the Baton which will be read out at the Games’ Opening Ceremony on April 4 next year.

The ceremony was held on the forecourt of Buckingham Palace to coincide with Commonwealth Day, which this year has the theme "A peace building Commonwealth".

The wheelchair racer was escorted up The Mall and into the Palace forecourt by the Band of the Scots Guard, their arrival preceding the entrance of the Royal Family.

"Launching the Queen’s Baton Relay on Commonwealth Day at Buckingham Palace is a fitting start to an inclusive and inspiring community relay that connects our diverse Commonwealth in celebration and anticipation of the next Games," said Martin.

"We passionately believe that friendly rivalry on the level playing field of sport can be a tool for building strong and peaceful communities and this has never been more relevant, as the Relay launch heralds the start of the Commonwealth family’s themed year of a peace-building Commonwealth.

"Her Majesty’s message to the Commonwealth and its athletes, carried safely inside the Baton, will be in great hands with many thousands of community Batonbearers.

"I look forward to following its remarkable journey and hearing the stories of all the athletes, communities and citizens involved."

An invitation was given by the Yugambeth people to all First Nation people around the Commonwealth to attend the Games.

It marked the first time representatives of the traditional custodians of the land where the Games are set to be held had taken part in the ceremony.

Emily Dean, a nine-year-old middle distance runner from Southport in England, held the message for The Queen before it was placed into the Baton.

She had been identified through the Adopt-a-Commonwealth country programme, part of Gold Coast 2018’s international schools connect initiative.

The track cycling great was joined by her long-time rival Victoria Pendleton of England on a walk around the Queen Victoria Memorial, with their unity viewed as being symbolic of the Commonwealth’s belief that competition can build lasting friendships and communities.

"Receiving the Queen’s Baton from Her Majesty was an experience that will be hard to top," said Meares.

"And it was a privilege to be able to share the moment with my longtime friend and fellow competitor Victoria Pendleton.

"It’s a truly unique opportunity to be able to carry the Queen’s Baton and her message."

The ceremony drew to a close when the Baton departed the Palace in the hands of Gold Coast singer Cody Simpson, who boarded a Kombi van loaded with surfboards to represent the Baton’s final destination.

Simpson, an environmental campaigner, had performed a rendition of I Still Call Australia Home earlier in the ceremony.

It has followed the arrival of Gold Coast 2018 mascot Borobi, the blue koala resplendent in a tuxedo.

The Baton will now will set off on a 388-day, 230,000 kilometres journey to the Gold Coast, beginning in Sierra Leone.

It will visit all 70 Commonwealth nations and territories in Africa, the Americas, the Caribbean, Oceania, Asia and Europe before it arrives to spend the final 100 days in Australia.

The Baton also appearance at an interfaith service at Westminster Abbey attended by The Queen and Prince Philip, Prince Charles and his wife Camilla, and Prince Harry and Prince Andrew.

Dame Jessica Ennis-Hill took the Baton down the aisle at the Commonwealth Service.