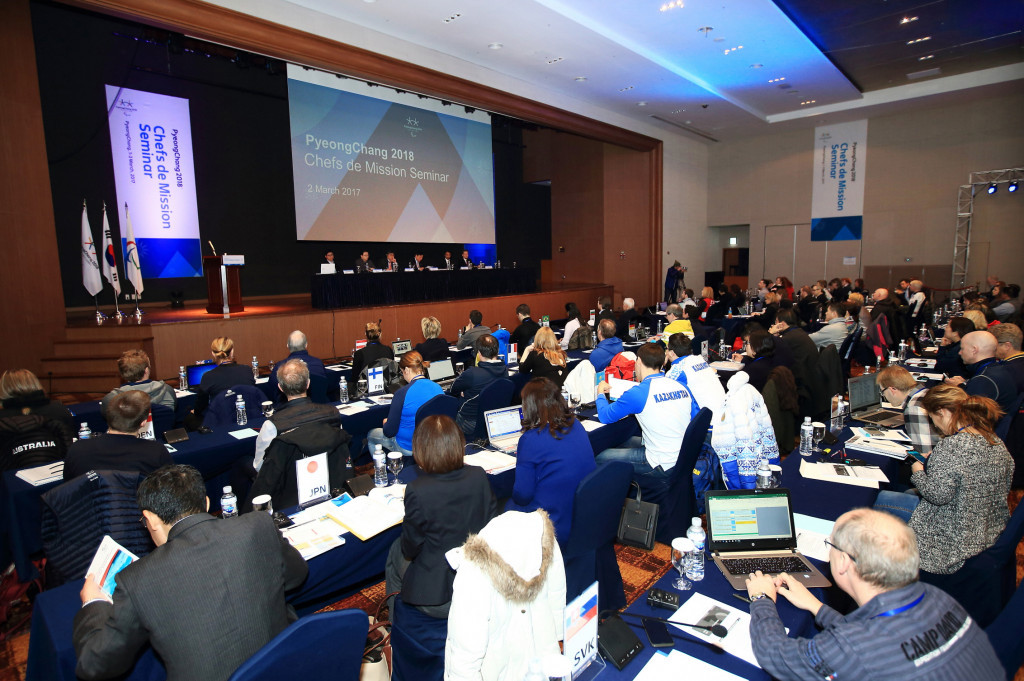 Over 90 delegates are attending the Seminar, which is due to run until tomorrow.

There will be a number of side meetings between NPCs, the International Paralympic Committee (IPC) and the Pyeongchang 2018 Organising Committee to ensure planning can successfully move ahead in the one year that remains before the Winter Games begin on March 9, 2018.

The Chefs de Mission will be briefed on different aspects of preparations while also conducting site visits to venues and other Games-time facilities.

“It is really unbelievable that we are only one year and eight days from the Opening Ceremony of the 12th Paralympic Winter Games here in Pyeongchang," said Pyeongchang Organising Committee President Hee-beom Lee.

"Over the next few days, we are pleased to provide you with a comprehensive overview of the Games and the Organising Committee's operational readiness through plenary sessions, venue tours, information booths and one-on-one meetings.

“With one year to go, we will continue to strive to create a sustainable Paralympic Games that contributes to peace, culture, the economy, environment and ICT, as well as the promotion of the Paralympic values and movement.

"The Organising Committee will do its best to deliver a most memorable and athlete-focused Games for all NPC delegations in Paralympic history.”

This session comes after National Olympic Committees (NOCs) raised concerns regarding accommodation and transport plans during their Pyeongchang 2018 Chef de Mission Seminar which ran from January 30 to February 1.

A total of 132 NOC delegates visited the South Korean county for the session in which they also inspected venues and given presentations on Games-time operations and services.

One aspect related to a lack of hotels in mountain clusters which could mean that vital team officials and coaches will have to stay in the Gangneung coastal cluster.

Rooms in the Athletes’ Village are already thought to be too small for any more people to be added, while the IOC also admitted that travel times from accommodation may be "longer than expected" for some groups.

There were also concerns about the transport, relating primarily to the high-speed railway connection between Incheon International Airport, Seoul and the Pyeongchang region itself and getting spectators home after events finishing in the evening.

However, Penny Briscoe, the Chef de Mission of the Great British Paralympic team, has given a glowing review of the progress made by organisers.

“The Chef de Mission Seminar is a major ‘stage-post’ in the Games preparations for all competing nations and we are delighted to be here with colleagues from around the world to see the progress being made by the Pyeongchang Organising Committee and the IPC ahead of the next Winter Paralympic Games," said Briscoe.

“With just over a year to go to the Games it’s a helpful reminder of all the hard work we have done so far and also what we have still to do in order for Great Britain to be best prepared.

“From my perspective, it looks like the Organising Committee’s plans are developing well and are on track which is very reassuring."

Starting on Saturday (March 4) with the World Wheelchair Curling Championship, Pyeongchang 2018 will host test events in all six Paralympic winter sports over the next eight weeks.

The IPC President said the "transformational impact" that the Games could have on South Korea may be reduced if progress in promoting the event is not made over the next 12 months.

Organisers have today reinforced their desire to host the "best Paralympic Games it can" and will look to increase its promotional efforts.

"POCOG is committed to delivering the best Paralympic Games that it can and is working closely with the IPC to do so," Pyeongchang 2018 spokesman Sung Baik-you told insidethegames.

"With just over a year to go until the start of the Games we will be building our awareness and engagement locally and internationally in the coming months and the all important tickets will be launching soon too."