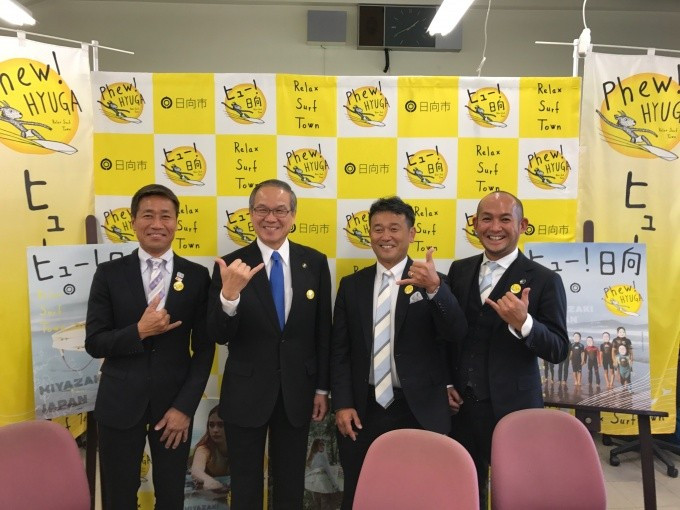 Kouhei Toya, the Mayor of Hyuga City, has expressed his delight at the news Okuragahama Beach will play host to the International Surfing Association (ISA) 2017 World Junior Championship between September 23 to October 1.

ISA announced earlier this week that the event will take place in the city on Japan’s southern island of Kyushu.

The competition is the largest junior surfing event in the world, with the 2016 edition in the Azores breaking participation records for the second consecutive year with 371 athletes from 39 countries.

Located in the Miyazaki prefecture of Kyushu Island, the 2017 event will be the first ISA competition to be held in Japan since the 1990 World Surfing Games were held on the Chiba peninsula.

“We at Hyuga City are deeply honoured to host the world’s largest junior surfing competition later this year, the first time this competition will be held in Japan," said Toya.

“I believe that Hyuga City was chosen in part because of our recent activities promoting surfing at Okuragahama, one of the Japan’s top surf spots, our bid to host the 2020 Olympic Surfing Competition, and our efforts with “Relax Surf Town Hyuga”, a new city development plan which places surfing at its core.

“I hope to see many of the attending competitors return to Japan in three years as representatives of their countries at the 2020 Tokyo Olympics.

"We at Hyuga City will handle preparations and management, doing our utmost to ensure all competitors and guests are completely satisfied.

“We hope that in addition to the competition, all competitors and guests enjoy Hyuga and Miyazaki, our oceans, and our delicious food while they are here.

“Finally I would like to express my deepest appreciation to ISA President Fernando Aguerre and everyone at the ISA who made this decision.

"I would also like to thank the NSA Chairman, Sakai, Vice Chairman, Imoto, and everyone in Miyazaki prefecture for their hard work in bringing this competition to Hyuga.”

The hosts will be looking to build on their historic performance at the 2016 VISSLA ISA World Junior Surfing Championship in the Azores Islands of Portugal.

Team Japan claimed the Copper Medal, which was their first team medal in the history of the event.

VISSLA, an innovative surf lifestyle brand, has committed to sustain their role as title sponsor of the event, that started at the 2014 edition of the event in Ecuador.