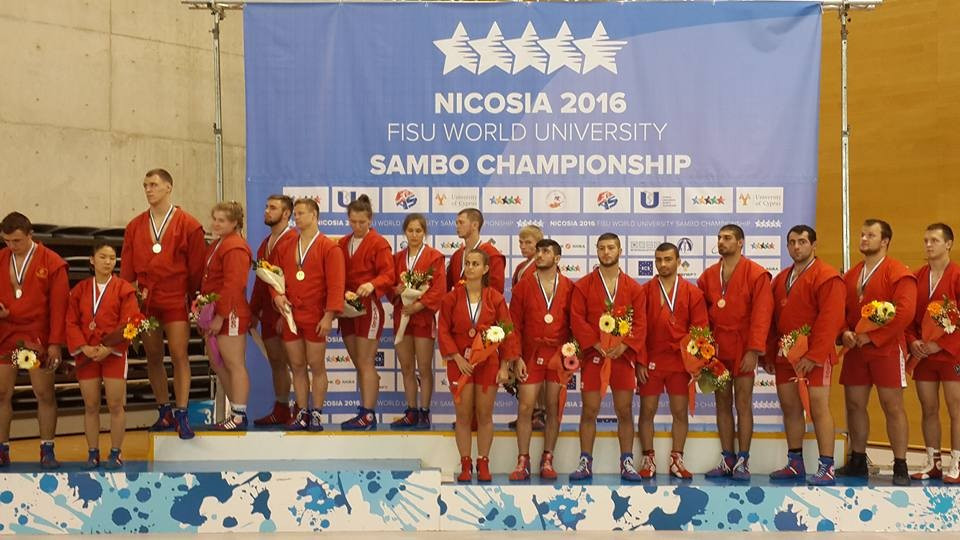 Russia capped off a successful three days here at the World University Sambo Championships by claiming the mixed team title at the expense of Kyrgyzstan.

Having beaten Lithuania 7-0 in the semi-finals of the four-team tournament, Russia went onto replicate the scoreline in the gold medal match to seal their success.

The Russians had a 2-0 head start in the final, with Kyrgyzstan unable to field an athlete in the both the women’s 68 kilograms and women’s over 68kg categories.

Margarita Lugova and Irina Kharitonova were thus awarded a point each, meaning Russia had to win just two of the remaining five bouts to secure victory.

Mikhail Diianov set them on their way with a 2-0 win over Talgarbek Azhikanov in the men’s 62kg and the gold medal was confirmed when Ilzira Kusiaeva overcame Nurzhanat Bekmatova 1-0 in the women’s 56kg.

An emphatic 6-0 triumph for Sergei Korobkin over Arsen Kamchibekov in the men’s 74kg stretched Russia’s overall lead to 5-0 as they set about ensuring a clean sweep.

Ivan Pakhomov then beat Maksim Manulov in the men’s 90kg before 2015 world silver medallist Dmitriy Eliseev got the better of Pavel Goncharov in the men’s over 90kg to complete a 7-0 rout.

Lithuania were joined on the third step of the podium by hosts Cyprus, who lost 5-2 against Kyrgyzstan in the other semi-final.

The first-ever World University Sambo Championships was for sambists aged between 17 and 28 who have valid subscription in a university recognised by the International University Sports Federation (FISU).

"I think we can all agree this event has been a success, especially when thinking it was the first time for sambo being organised in the World University Championships calendar.

"In the last three days, we have seen excellent sport, good matches and sportsmanship.

"These World Championships have shown the highest technical level and excellence, which are the basic requirements in university sports."

The next edition is scheduled to be held in Serbian city Novi Sad in December 2018.