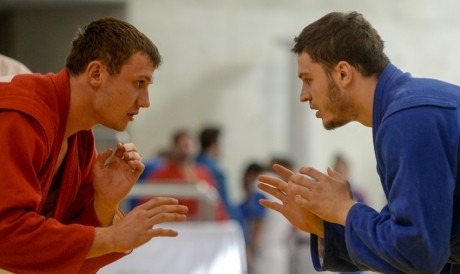 Russia sealed top spot in the medal standings at the inaugural World University Sambo Championships here in Cyprus’ capital after claiming a further four golds today to take their tally to 10.

Sergei Korobkin then triumphed over Azerbaijan’s Kamran Askarov in the men’s 68kg gold medal match and the hat-trick was complete when Anastasiia Filippovich got the better of Ukraine’s Nataliia Pylypenko in the women’s 80kg final.

An extremely productive couple of days for the Russians was rounded out by Dmitriy Eliseev, who claimed top honours in the men’s 100kg category at the expense of Moldova’s Denis Tachii.

Bronze medals also went the way of Belarus’ Valeryia Smuhunova and Belgium’s Deborah Masy in the women’s 80kg and France’s Antony Segard and Belarus’ Raman Yarmaliuk in the men’s 100kg.

Russia did not have things all their own way today, however, as they suffered defeats in three of the other four finals.

Ilizira Kusiaeva lost out to Belarus’ Kseniya Danilovich in the women’s 52kg before Gulfiia Mukhtarova was beaten by Ukraine’s Anastasiya Shevchenko in the women’s 60kg and Margarita Lugova fell at the hands of Serbia’s Ivana Jandric, the 2015 European Games gold medallist, in the women’s 68kg.

In the only final not involving a Russian sambist today, Ukraine’s Dmytro Stetsenko overcame Georgia’s Imeda Gogoladze to take the men’s 82kg crown.

The World University Sambo Championships are set to continue tomorrow with a team tournament, featuring four men’s categories - 62kg, 74kg, 90kg and over 90kg - and three women’s divisions - 56kg, 68kg and over 68kg.

Countries will compete in teams of seven, made up of four men and three women, with each bout seeing sambists fight for a point towards a winning score of four.