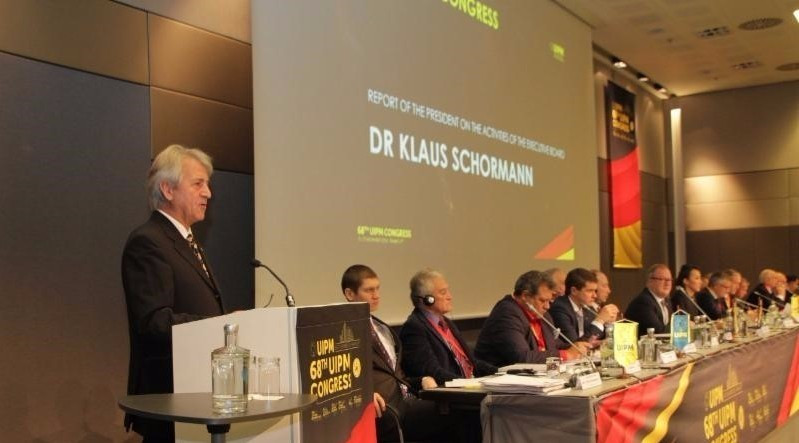 Klaus Schormann has been re-elected President of the International Modern Pentathlon Union (UIPM) after he stood unopposed at the governing body’s Congress in Frankfurt today.

Schormann first took charge of the organisation back in 1993 and he received "unanimous support" from the UIPM’s membership to continue in the role for a seventh term.

The German was the only candidate in the running and will now be tasked with leading the organisation through to the 2020 Olympic Games in Tokyo.

The election was initially due to take place tomorrow but the Congress agreed with a motion proposed by European Modern Pentathlon Confederation President Dmitry Svatkovsky that they be staged today.

Schormann was visibly emotional after the Congress gave him a standing ovation once his re-election was confirmed.

"I am more than pleased and very honoured that the Assembly has chosen to elect me as President a day before the election was supposed to take place," he said.

"It gives me a very strong feeling to do my best with all my energy.

"I have to thank my family, especially my wife, for their ongoing support.

"I am looking forward to the continuation of our elective Congress tomorrow and I am sure I will be given a great team for the next Olympic cycle.

"A great leader is nothing without a great team."

As well as Schormann’s re-election, the UIPM Congress also made a number of key decisions.

They voted to formally incorporate the laser-run discipline, which comes from the traditional combined running and shooting event, into modern pentathlon competitions.

It will be "introduced as a replacement terminology for combined event, the run/shoot discipline that is the climax of modern pentathlon," the UIPM said.

The UIPM also agreed to update its anti-doping constitution to ensure "full compliance with the latest recommendations from the World Anti-Doping Agency".

This includes the UIPM becoming the sole results management authority for any anti-doping rule violations.

A recent WADA report revealed that 642 samples were taken in the sport in 2015 and no adverse analytical findings were found.

An alteration to the scoring system, which will see the swimming points cut from three per second to two per second, was also approved by the UIPM.

The governing body say the change is aimed at "stimulating development in countries where the swimming infrastructure is not fully established".

The Congress in Frankfurt was officially opened yesterday in the presence of International Olympic Committee President Thomas Bach.

The UIPM then inducted 10 athletes, administrators and other individuals, such as Baron Pierre de Coubertin, the founder of the modern Olympic Games, into its Hall of Fame.

"Modern pentathlon is the only sport that was founded for the Olympic Games by Pierre de Coubertin, who wanted to find the complete athlete," Bach said.

"This is what we are striving for: excellence and perfection, in our sports and in our organisation as well.

"I have had a connection with modern pentathlon for many years and I have been able to follow the great developments which demonstrate excellence in the development of sport.

"You always have to change: that's what modern pentathlon has embraced.

"In your new competition format in fencing you have done a lot for the presentation of your sport.

"I hope that this will continue into the future - I'm happy and proud of what you have achieved in Rio.

"Modern Pentathlon has played an important role by modernising sport, combining and creating more attraction for the audience."