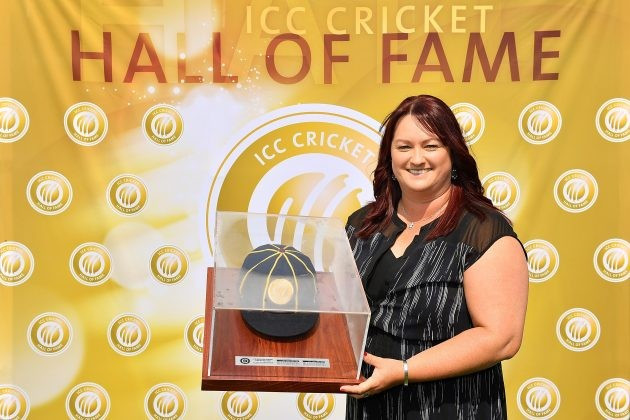 Former Australian captain Karen Rolton has been inducted into the International Cricket Council (ICC) Hall of Fame during a ceremony in Adelaide.

Rolton was presented with a special personalised cap by ICC chief executive David Richardson during the tea interval in a Test match between Australia and South Africa at the Adelaide Oval.

She became the 81st player to be inducted into the ICC Cricket Hall of Fame and the sixth woman to receive the accolade.

She also scored 4,814 runs with eight centuries across 141 One-Day Internationals.

She was the first recipient of the ICC Women’s Player of the Year award in 2006 and was part of Australia's World Cup winning sides in 1997 and 2005.

"To be acknowledged like this is something that I never expected and am truly grateful to be listed amongst some of my all-time cricketing heroes," she said.

"It’s with great honour that I accept this award of being inducted into the ICC Cricket Hall of Fame. To be acknowledged like this is something that I never expected and am truly grateful to be listed among some of my all-time cricketing heroes.

"Cricket has been a part of my life since I can remember.

"From growing up in Adelaide and playing backyard cricket with my brother to captaining my state and country.

"It’s been a childhood dream and one that I’m grateful for."

Rolton is also the only Australian woman with more than 1,000 Test runs and the only batter to score a century in the final of a World Cup.

Her 209 not out against England at Headingley in 2001 is the highest individual score by an Australian - man or woman.

"Karen had a long and successful career which saw several high points, including a century in an ICC Women’s World Cup final," said Richardson.

"She proved her class time and again with superb performances, particularly in big matches making her so well respected.

"She was a player women cricketers from around the world looked up to."