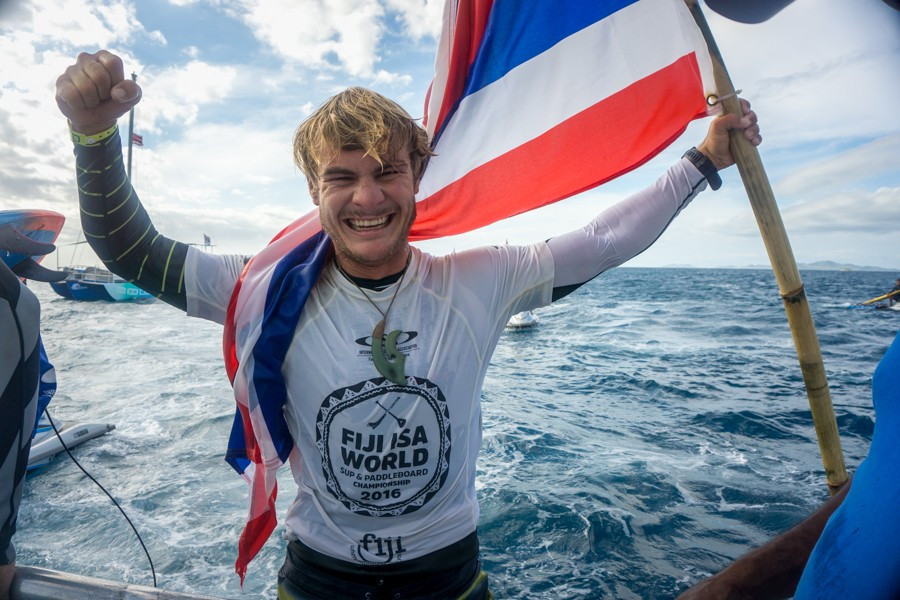 With one day of competition remaining, Australia also extended their overall lead while France remain close on their heels, looking to take gold in the team event for the first time.

With American state Hawaii competing separately from the rest of the United States, Schweitzer arrived in the men's final following an impressive semi-final performance, and was up against South Africa’s Tomas King, Giorgio Gomez of the US and another Hawaiian in Mo Freitas.

In the dying minutes of the gold medal contest, Schweitzer pulled into a gaping barrel, flew out and finished the wave with impressive turns to the delight of the boats in the channel who erupted in cheers.

Schweitzer was awarded with a nine point ride that propelled him from third to first with a total of 15.70 points, good enough to secure his place as the new men’s SUP world champion.

Schweitzer’s team-mate, Freitas, finished with the silver medal on 15.07 points, while Gomez claimed bronze on 14.77 and King took copper for fourth place on 9.33.

"Mo [Freitas] and I grew up together and we pushed each other to be here," said Schweitzer.

"I am so stoked to take gold and silver for team Hawaii.

"This is a dream come true for us all to be here.

"What we love about this event is that it’s not an individual sport, we get to cheer each other on."

In an equally exciting women’s final, Australia’s Westdorp was crowned world champion with a total score of 14.06 points.

Westdorp was given a chance to redeem herself after previously making the final of this event three times, failing to win the gold on all three occasions.

"This is the fourth time that I came to this event.

"I’ve won two silvers and I finally won the gold so I am so stoked.

"The waves are pumping too, it’s been an epic weekend with team Australia and hopefully we can take home the team gold."

Tomorrow's final day of competition in Fiji is set to feature relay races, the 200 metres sprint races and the Closing Ceremony in Port Denarau.