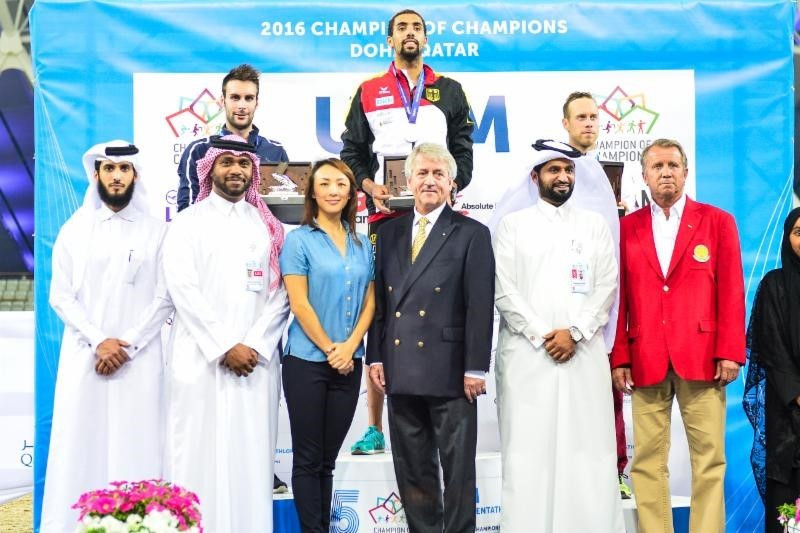 The world number 10 was left back in the pack after the swimming and fencing events earlier in the day at the Qatar Foundation Recreation Centre and Al Shaqab Arena.

With several of his rivals having had refusals from their horses during the riding event, Dogue gained ground by top scoring in the event with 300 points.

He begun the combined event 13 seconds down on the leader, Britain’s James Cooke, who had a one second advantage over the Belarus’ Mikalai Hayanouski.

The lead changed hands on several occasions during the combined event, but Dogue crucially held the advantage heading into the final shooting section.

Dogue kept his nerve, having been closed down by France’s Belaud, as he shot accurately to pull away from his rival again.

The German crossed the line with a comfortable advantage, winning the Champion of Champions title with 1,438 points.

His victory ensured the weekend saw a German double after Annika Schleu triumphed in the women's competition yesterday.

Belaud had make do with the runners-up spot, ending on 1,430 points, with Hungary’s Robert Kasza ending a further three points behind in third place.

"For a second day we have seen a very high level of competition with many Olympic athletes here," said UIPM Klaus Schormann.

"The combined laser-run was again very exciting, and it's good to hear the athletes reflecting that they like this Champion of Champions competition and are very willing to support it in future.

"What we have also learned in the last two days is that Qatar will be a future destination for high-level competitions, and also that young Qataris will feature in our competitions.

"It's a good way to finish the year for our union, to have a high-level competition but also from a sporting political perspective to see that we can develop our sport in this region, which has no existing tradition in modern pentathlon."

A Qatari athlete, Khalid Al-Nuaimi, was invited to take part in the competition for the first time and, despite finishing in last place, was given an ovation as he crossed the line by his fellow athletes.

The event brought the UIPM season to its conclusion, with the first round of the 2017 World Cup due to begin in Los Angeles from February 23 to 27.