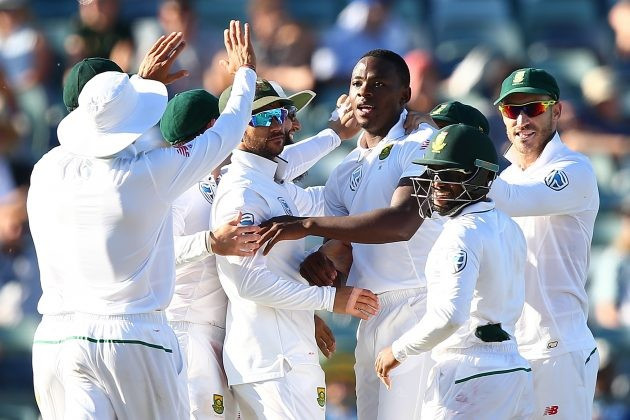 South Africa's bowler Kagiso Rabada and batsman Quinton de Kock have moved into the top 20 of the International Cricket Council (ICC) Test Player Rankings for the first time in the latest list published by the sport’s worldwide governing body.

Rabada, considered one of the rising stars in the game, has jumped 10 places into 20th spot in the bowlers rankings following an excellent performance in his team’s victory over Australia in the first Test in Perth, which concluded on Monday (November 7).

The 21-year-old returned figures of 2-78 and 5-92 as South Africa stormed to a 177-run win in the opening Test of the three-match series.

He becomes the fourth South African fast bowler to feature in the top 20, joining the injured Dale Steyn, ranked second but who has been ruled out of the Australia series with a shoulder problem, Vernon Philander and Morne Morkel.

De Kock has leapt to 20th in the batsman rankings after he scored 84 and 64 in Perth, which saw him move up 11 places from 31st.

The 23-year-old left-hander, who is also the team’s wicketkeeper, is the fifth batsman from the nation on the list, with Hashim Amla dropping to sixth, one place ahead of the injured AB De Villiers.

As a result of the comprehensive success for South Africa against Australia, opener Dean Elgar sits in a career high place of 24th.

JP Duminy has been lifted nine spots to 38th after hitting the fourth century of his Test career.

Ranking points are also on offer during the five-game India versus England series, which got underway in Rajkot today.

India will be hoping to end the year as the top ranked Test nation and they will achieve the feat if they avoid defeat against the tourists.

A drawn series or better will leave India on a minimum of 113 points, although England could climb above the host nation if they claim a 4-1 win.

England boast the highest ranked Test batsman of the two teams in Joe Root, who currently lies in third place and enhanced his chances of rising further up the ladder by hitting 124 as his team closed day one on 311-4.