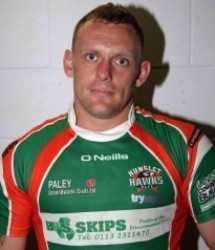 The 31-year-old, a winger for Hunslet Hawks, failed for anabolic steroid nandrolone and metabolites of the steroid oxymetholone following an out-of-competition test on June 16 of this year.

Pat Myhill, the director of operations for UK Anti-Doping, said: "Testing positive for the presence of multiple prohibited substances is a serious breach of the anti-doping rules and the spirit of sport.

"When Lee Mapals made the decision to dope, he also chose to cheat his team-mates, his opposition, his fans and his sport.

"At the same time, his actions risked not just his career, but his reputation and health.

"UKAD will always seek to impose the maximum possible sanction on any individual who decides to consciously cheat the system.

"I hope that this case acts as a deterrent to others who are considering the use of performance enhancing substances."

Hunslet play in the Kingstone Press League One in England, the third tier of rugby league in the country.

Rugby in Britain has been plagued by doping problems this year, across both the league and union codes.