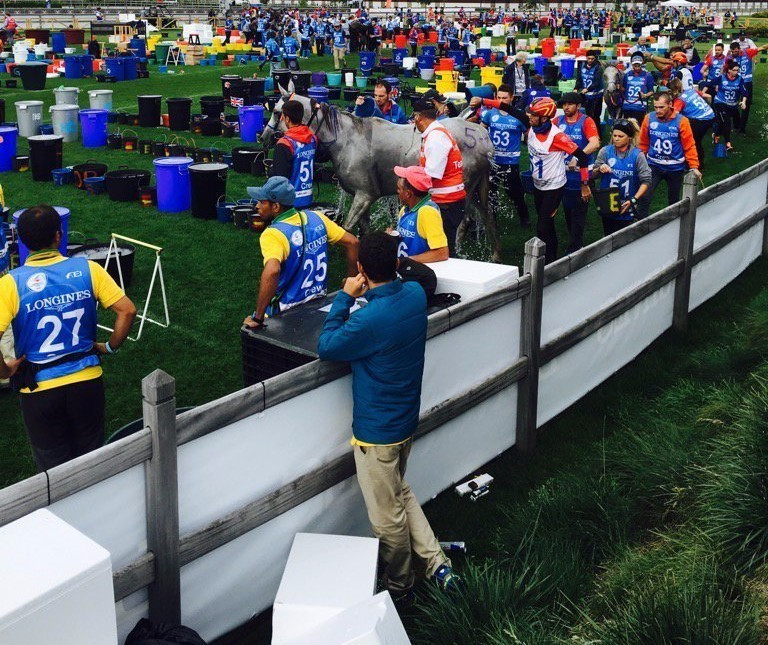 The bizarre finish to the race began when Saif Ahmad Al Mazroui started to wave the United Arab Emirates flag as he crossed the line in first position, only for his horse Napoli Del Ma to be disqualified by the judges for an imperfect gait.

Jonatan Rivera Iriarte of Uruguay appeared well placed to secure the crown but the same fate befell his horse - LG Muneerah - meaning he was also disqualified.

Al Mazroui's compatriot Ganem Abdullah Al Merri was the third rider who thought he had done enough for victory only to have his hopes dashed as his horse Quran El Ulm was found to have a metabolic condition by the vet, ruling him out of contention.

Dachs, forced to deny allegations of wrongdoing back in 2013 when the Department for Environment, Food and Rural Affairs in Britain seized over 100 veterinary products from Moorley Farm East in Newmarket, finished the gruelling 160 kilometres course in a time of 6 hours 46min 42sec.

The Spaniard was given the gold medal after his horse passed the veterinary test.

"This is so emotional," he said.

"I had a young horse and he did really  very well on the course.

"That was the most important that he managed the race so well.

"Unfortunately we had a bad luck as my wife Maria got out on the second loop but we have to deal with it."

The event was initially due to be held in Dubai before the Emirati city was stripped of the hosting rights earlier this year following horse welfare concerns.

The Samorin Equestrian Centre, the venue for last year’s European Championships, was chosen to stage the event ahead of rival submissions from Fontainebleau in France and Pisa in Italy by the FEI’s Endurance Committee.

Both the French and Italian bids were rejected after they proposed mid-October for the Championships, meaning rides would start and finish in the dark.