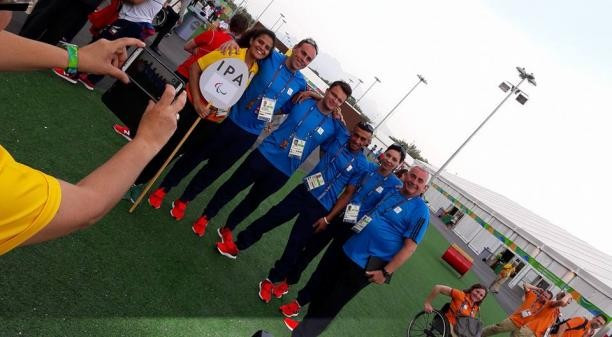 Four teams, including the two Independent Paralympic Athletes, were welcomed to the Athletes Village in Rio de Janeiro ahead of the start of the Paralympic Games.

In a tradition that officially greets delegations at the Village, the Team Welcome Ceremony aims to demonstrate some of the host nation’s culture and customs to its guests.

Ibrahim Al Hussein and Shahrad Nasajpour, the two refugee athletes comprising the Independent Paralympic Athletes (IPA) Team, were in attendance along with athletes from Chile, Ireland and France at the Village Plaza.

The Ceremony opened with Brazilian tribal dancing, indigenous chants and African drums before the flag raising and national anthems for each nations were performed.

Professional dancers then went into samba and hip-hop performances and encouraged the delegations at the Ceremony to participate.

"It was a very exciting environment, exciting even for me as a first-time Paralympian," Nasajpour said.

"I’m living here so I’ve been hearing it outside my window.

"I saw the last few Welcoming Ceremonies outside my balcony but actually being here is awesome."

All delegations receive an official Welcome Ceremony at the Village.

A further 45 are expected to take place before the Opening Ceremony of the Paralympics on Wednesday (September 7).

For the IPA, this is the first time a dedicated team of its kind will compete at the Paralympics. Al Hussein and Nasajpour will be competing under the IPC flag and national anthem.