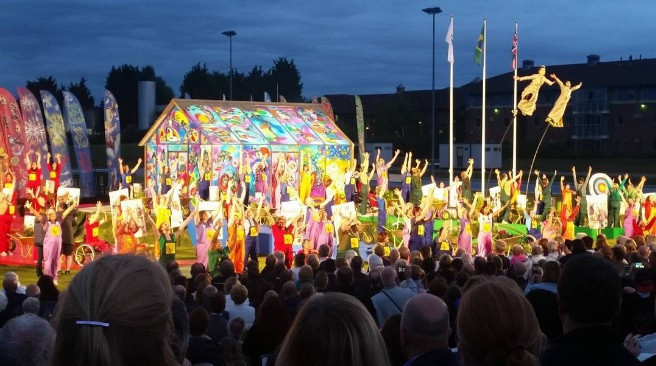 A special Paralympic Heritage Flame has been lit at a ceremony held in Stoke Mandeville, the birthplace of the Movement, five days before the start of Rio 2016.

The Flame will now be sent "virtually" to Brazil, where it is due to merge with the Brazilian Regional Flames to create the Paralympic Flame that will run the relay and light the Cauldron in the Maracanã Stadium during Opening Ceremony next Wednesday (September 7).

The event at Stoke Mandeville Stadium in England was watched by around 1,400 people and was attended by a number of legendary British Paralympians, including Baroness Tanni Grey-Thompson and Kelly Gallagher, winner of the country's first-ever Winter Paralympic gold medal at Sochi 2014 in the women's visually impared super-G.

Baroness Tanni, winner of 11 Paralympic gold medals and a keen advocate of disability sport in Britain, officially lit the Fame on stage, accompanied by Gallagher.

"I spent most of my childhood at Stoke Mandeville," she said.

"It's such an important part of the Paralympic Movement and it's great it's being recognised around the world.

The ceremony started with the raising of the Paralympic Flag, before the Brazilian national anthem rang around the Stadium.

Tim Reddish, chairman of the British Paralympic Association, then delivered a speech in which he outlined the importance of lighting the Flame at the iconic venue.

"It marks our unique role in the history of the Movement," he said during the ceremony,televised on Paralympic broadcaster Channel 4.

"It connects us with Rio and our athletes.

"It will be the most competitive Games.

"They'll be proud to represent our great country.

"I believe there is no competitior to what Brazil has to offer."

An animated film by visual artist Rachel Gadsen, entitled The Seeds of Diversity, was shown, depicting the story about Stoke Mandeville.

It included a short segment on the archery competition at the Stoke Mandeville Games in 1948, the forerunner to the Paralympics which was launched by Sir Ludwig Guttman, before the volunteers demonstrated how the event has spread across the world by assembling on the garden of flowers, seed packets and wheelbarrows.

Baroness Tanni then came on stage to light the Flame, sparking a set of spectacular fireworks to bring the night to a close.

The inaugural Heritage Flame was lit at Stoke Mandeville Stadium in 2014 to celebrate the start of the Winter Paralympics in Sochi.