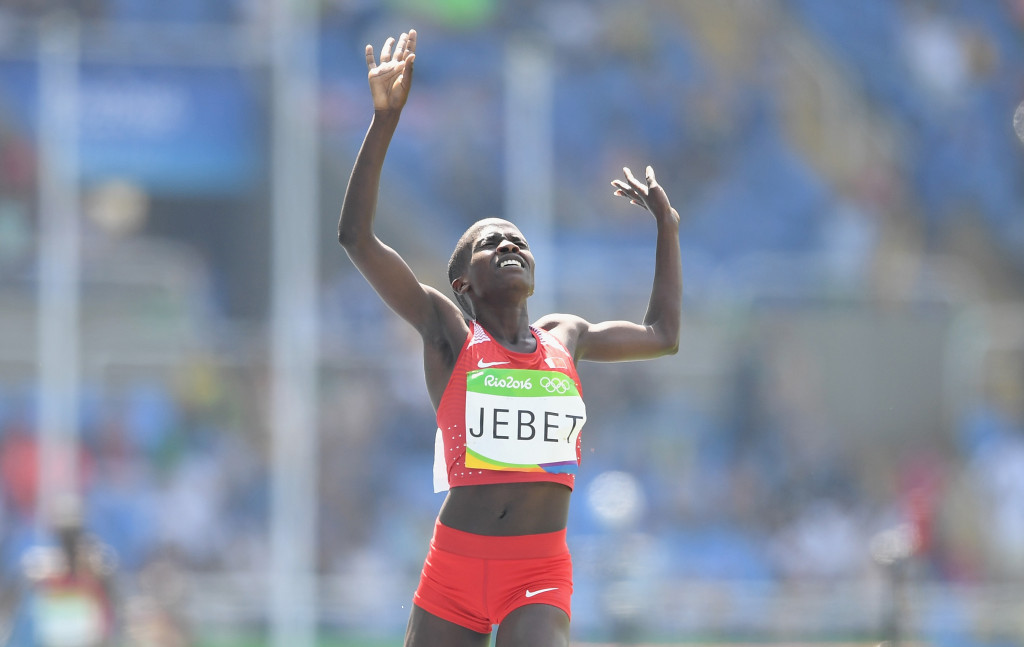 Yomif Kejelcha of Ethiopia contributed a second world record to the meeting as he set a new Under-20 mark of 7min 28.19sec for the 3000m.

Other stellar contributions came from Britain’s Laura Muir, who lowered her British 1500m record to 3:55.22, the fastest run time this year, in defeating Kenya’s Olympic 1500m champion Faith Kipyegon, and New Zealand’s Tom Walsh, who twice set area records in the men’s shot put, winning with a final round best of 22.00m.

On the eve of the International Association of Athletics Federations’ (IAAF) Paris Diamond League meeting Jebet - a naturalised Kenyan who has twice come within a second of Galkina’s mark this season - said she was not going to attempt to break it.

But it became clear that a new mark was on when a field which also included Kenya’s world champion Hyvin Kiyeng and Rio 2016 bronze medallist Emma Coburn of the United States was taken through 1000m inside world record pace by Kenyan pacemaker Caroline Tuigong, due to complete in 3min 01.00sec, who clocked 2:56.36.

Jebet narrowly defeated Kiyeng at the Eugene Diamond League meeting in May, clocking what was then the second fastest time ever, 8:59.97, and in Rio she finished even closer to the mark, in 8:59.75, although she maintained afterwards that she had not been aware of how close she was to the world record.

“I tried many times to beat the world record, and today we decided to push each other to go for a good time.

“The pacemaker was very strong as she was in the Olympics.

“I was not expecting such a big difference with the record -  I think I finished my season today.”

Jebet’s performance was closely followed by that of Muir, who finished decisively clear of Kipyegon (3:56.72) with world indoor champion Sifan Hassan of The Netherlands third in a season’s best of 3:57.13.

Muir paid for her bold ambition in the Rio final, eventually slipping to seventh, but here she got everything right as she earned her third Diamond League win in the past two seasons in a time that heads the 2016 world list and is also a meeting record.

“The race was amazing, I couldn't believe the time, especially since I didn't do one track session since Rio,” said the 23-year-old veterinary student at Glasgow University, who beat Kelly Holmes’ 12-year-old British record in London last month as she won in 3:57.49.

Behind her six women set personal bests, and there were season’s bests for US runners Shannon Rowbury , fourth - as she was in Rio - in 3:58.00 and Rio bronze medallist Jennifer Simpson, who recorded 3:58.19 in sixth place.

Walsh, the Olympic  bronze medallist, arrived in Paris on a mission, commenting afterwards: “After Rio I had something to prove.”

His sixth and final effort of 22.00m - an area record and meeting record - was enough to beat Rio gold medallist Ryan Crouser by just one centimetre.

It was the second area record-breaking effort on the night from Walsh, who had taken a second round lead with 21.81, only for the US Olympic champion to eclipse that with a third-round effort of 21.99.

Walsh has taken over this season’s Diamond Race in his event from the US world champion Joe Kovacs, eighth in Paris with 20.18, who now trails Walsh 38-34 on points, with the final, which scores double, coming up in Zurich on Thursday (September 1).

Kendra Harrison, who set a world 100m hurdles record of 12.20 in London last month having failed to make the US Olympic team, offered further evidence of what might have been in Rio as, two days after winning at the IAAF Diamond League meeting in Lausanne in 12.42, she again beat a top class field, clocking 12.44.

Both times were faster than the 12.48 with which Brianna Rollins led a US clean sweep in the Rio 100m hurdles final.

The men’s pole vault turned into a tense battle between the men who took silver and bronze respectively in Rio behind Brazil’s prodigious Thiago da Silva - France’s world record holder Renaud Lavillenie and Sam Kendricks of the United States, with the home athlete earning victory as the only one to clear 5.87m.

Lavillenie then went on to make a first-time clearance at 5.93 before three failures at 6.00.

Spain’s 37-year-old Ruth Beitia, who reversed her decision to retire after Rio 2016 when she won high jump gold there with 1.97, earned another victory here at one centimetre over that height before going on to have an unsuccessful crack at 2.02m, which was a centimetre over the best achieved this year and would have equalled her 2007 personal best.

Dafne Schippers of The Netherlands, world champion and Olympic silver medallist over 200m, maintained her grip on the Diamond Race trophy as she won in 22.13 ahead of her training partner, Britain’s Desiree Henry, who clocked a personal best of 22.46.

Croatia’s Olympic women’s discus champion Sandra Perkovic just needs to turn up fit for her Diamond Race final in Zurich and a fifth consecutive title is hers.

Perkovic produced an escalatingly excellent sequence of throws finishing with a best of 67.62m as, behind her, home thrower Melina Robert-Michon and Denia Caballero of Cuba replicated their second and third places in Rio with bests of, respectively, 64.26 and 61.98.

In the men’s 400m hurdles Kenya’s world champion Nicholas Bett, who was disqualified in his Rio heat for crashing through the last barrier, gave a hint of what might have been as he defeated the Olympic champion, Kerron Clement, in a time of 48.01, with the American clocking 48.19.

Ben Youssef Meite equalled the Ivory Coast 100m record of 9.96m as he won the final event of the night, the men’s 100m, with home runner Jimmy Vicaut, who equalled the European record of 9.86 earlier this season, back in fifth after clocking 10.12.