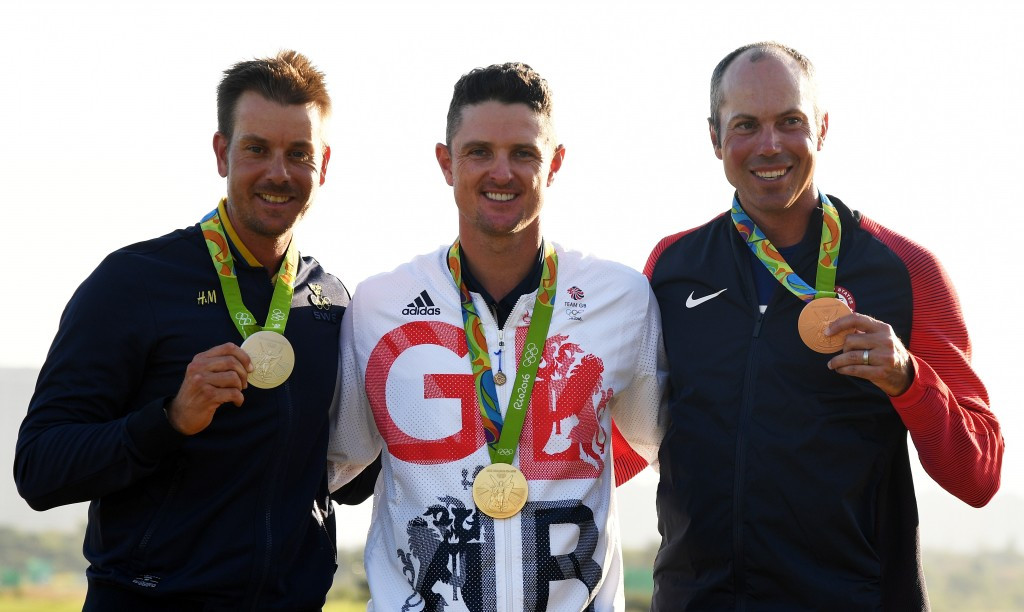 Britain's Justin Rose won the first gold medal in golf for 112 years as a birdie on the 18th hole was enough to see off the challenge of Sweden's Henrik Stenson today.

Rose, the 2013 U.S Open champion, has become the third man to win individual golf gold after American Charles Sands in 1900 and George Lyon of Canada in 1904.

He finished on 16-under-par as Stenson ended a shot adrift on 15-under.

The Englishman also made history by hitting Olympic golf's first hole-in-one in the opening round and started Sunday with a one-shot lead, before shooting four birdies and just one bogey on his outward nine.

However, Stenson was in no mood to go quietly and birdies in four of his first 10 holes kept him within touching distance of the leader, and when Rose dropped a shot on the 13th they were level.

It was a tense day throughout and they could not be separated until the most important and decisive moment.

Both players hit drives way right of the 18th that barely stayed on the fairway.

They then, once again, mirrored each other with approach shots that left them just short of the green.

Stenson stepped up first and his effort didn't grip well, rolling away from the flag to leave him with a long putt for birdie.

The South-African born Briton made him pay and lifted the ball to within two feet and Olympic glory.

The Swede, who clinched the Open title last month, faltered and three-putted for bogey, before Rose tapped his home for a birdie to seal his first tournament win since October 2015, etching his name into the history books.

The bronze medal was won by American Matt Kuchar.

The United States is now the only country to have won a medal in men's individual golf at all three Olympic Games the sport has been held - 1900, 1904, 2016.

Kuchar hit the best round of the day as he fired a 63 to finish on 13 under par.

That felt better than anything I've ever won. It was the best tournament I've ever done," Rose said.

"It felt like a cross between a golf tournament and a carnival.

"It was unique, incredible.

"Coming up with that last pitch when I needed it was magical.

"Hopefully we've shown Brazil what golf is about."

The women's competition is due to get underway on Wednesday (August 17).