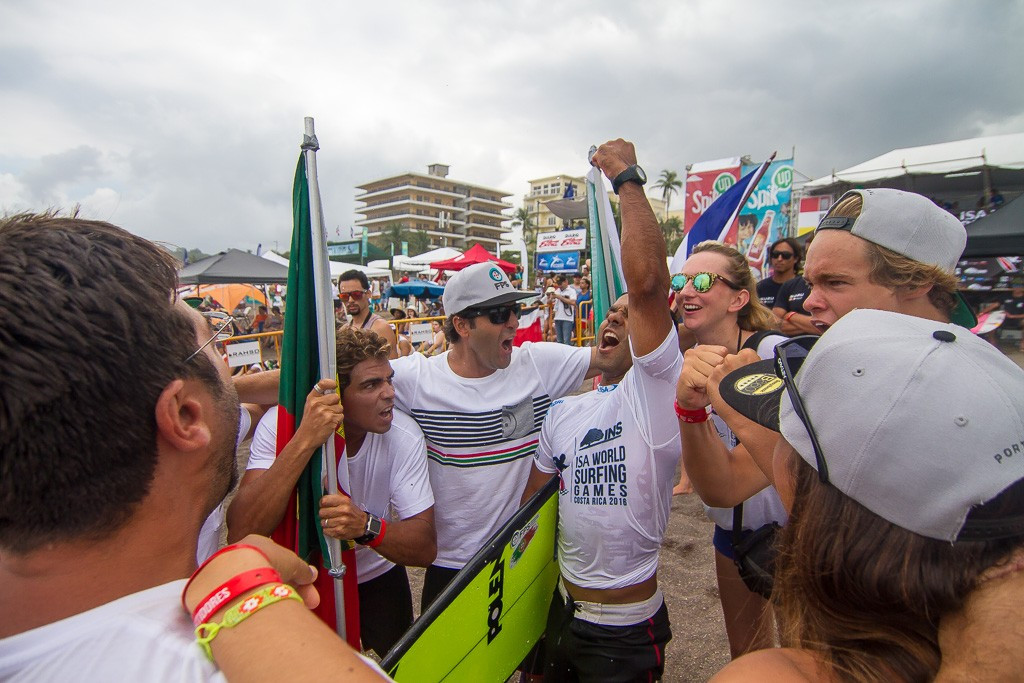 With 3981 points on offer on the last day, the Portuguese side currently sits in first place ahead of Peru who are on 3745, France who have 3308 and hosts Costa Rica who boast 3055.

The first medal of this year's competition was awarded in front of a boisterous crowd as the United States emerged victorious in the final of the ISA Aloha Cup - a "tag team relay" event.

“What an amazing ISA Aloha Cup Final," he said.

"Team USA has won the first gold medal of the 2016 ISA World Surfing Games and the first in the era of Olympic surfing.

“The energy on the beach was amazing while I watched on the webcast, just a dose of what we will experience tomorrow when the individual and team gold medals are awarded.”

The penultimate day of competition commenced with two heats of open men's repechage round seven action.

In the opening heat, Japanese team-mates, Takumi Nakamura and Hiroto Arai, eliminated local fan favourite Carlos Muñoz from the competition, after he was only able to put together a total of 12.50.

The men's round five and open women's round four followed, setting up the finals heats for both genders.

On the women’s side of the competition, American Tia Blanco, Dominic Barona of Ecuador, Portugal's Teresa Bonvalot and Justine Dupont of France will compete in the final.

The winners of the main event final will then progress to the grand final, competing against the top two athletes of the repechage final.

In the quarter-finals and semi-finals of the open men's and women's repechage rounds, Peru’s Lucca Mesinas and Argentina’s Leandro Usuna, the 2014 men’s gold medallist, both advanced to the men's final, where they await the losers of the main event final.

To cap off the excitement on day seven, the ISA Aloha Cup gave the crowd a taste of the ISA’s unique "tag team relay" event.

Team USA took an early lead in the final and never looked back.

They were closely trailed by Argentina, but USA’s team total of 73.49 was superior to the South Americans' total of 66.64.

USA’s female surfer in the final, Maddie Peterson, said: “It’s such an honor to win the first gold medal of the event and to represent the USA.

"Team-work was the most important thing.

"We are all so close and connected so it’s definitely a blessing to have them all here."