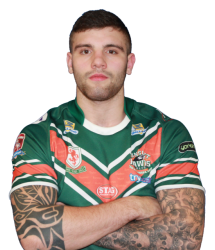 Darby, a member of the Hunslet Hawks team, who compete in the third tier of rugby league in England, tested positive for three anabolic steroids - nandrolone, oxandrolone and trenbolone - in an out of competition test in January.

He becomes the 15th rugby league player to be currently serving a doping suspension in Britain.

Darby, who admitted the offence, has been ruled out from February of this year until February 2020.

It comes after UKAD chief executive Nicole Sapstead had admitted in May that there was a “worrying trend” of youngsters in the sport using steroids.

“It is sad to see yet another case where a young person’s sporting career is ruined by their conscious decision to use steroids,” said Sapstead.

Sapstead added: “What these young men do not realise is that these substances are incredibly dangerous and linked to serious side effects including heart problems, aggression and mental health issues.

“A more worrying matter is that these substances are frequently being bought through the internet and frequently the buyer believes they are coming from legitimate websites or legitimate sources.

“We continue to work closely with law enforcement partners to uncover illegal labs where these substances are made by amateur chemists, where conditions are unhygienic.”

The sports of rugby union and rugby league have had continual problems with doping in recent months.

There are currently 24 British rugby union players who have been banned by UKAD for drug offences, including convicted drug dealer Andrew Quarry, who was given a 12-month suspension in May.

Rugby union and league players have also accounted for 14 of the 19 bans handed out by UKAD in the past 12 months.